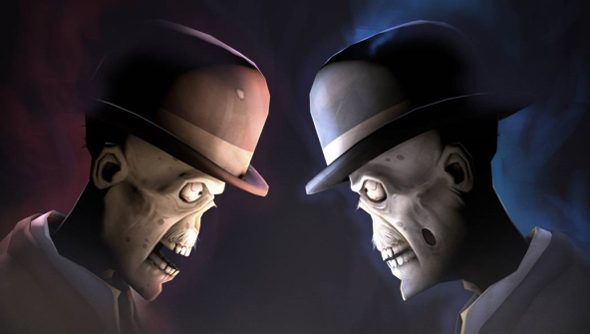 ‘Eternaween’ – that’s what Valve are calling it. The Eternaween server enchantment can force a server vote, and if all assembled agree, Halloween items will be switched on for a two-hour period of unseasonal festivity. Outside of that optional reprieve, however, nearly all Halloween event items have automatically expired – the last two, the Spooky Crate and the Pile of Curses, will be gone by the end of today.

Even yesterday, the TF2 dev team were still tweaking their Halloween update for maximum scares – fixing an exploit on Helltower, accessed by attempting to change teams while in hell. But Halloween spells have now been updated such that their effects are only visible during future Halloween or Full Moon events.

Elsewhere, Valve have fiddled with the Jupiter Jumpers so that they can be equipped at the same time as the similarly brilliantly-named Mantreads and Gunboats. And finally, TF2’s most popular piece of chess board-based headgear, The Grandmaster, will now update its model based on its owner’s current kill streak.

There concludes the day’s news in TF2. D’you think you’ll be resurrecting Halloween one last time?