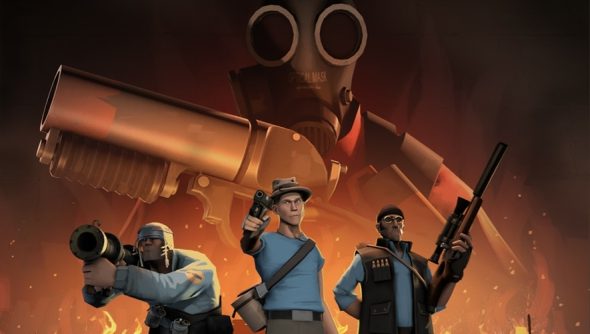 Other than the Pyro, a few of the ‘S’ classes received new weapons (not The Spy) in the Pyromania update, themed around the more urban environment of ‘Teufort’, a city with smelly sewers, professional assassins, cocky killers, and homeless ex-military. Like a lot of the TF2 updates, the new weaponry, they’re a mixed bag: some successful, some oddly class-breaking. All are craftable, at least. Stats: Gain’s focus on kills and assists. Focus activates on Fire, when focus meter is full. In Focus: 25% faster charge and no unscoping. Headshot kills cause decapitation
-20% damage on bodyshots. It’s a beautifully designed sniper rifle: it has a lovely, silenced pop when firing.

Why use it?
If you’re an ace at headshots, it has a good trade-off for losing 20% power in body shots. ‘Focus’ is just a fancy way of saying you charge more quickly. Interestingly, when in focus mode the metre can be added to with headshots, so a good sniper with plenty of targets can stay in it for a decent amount of time. It also lets you shoot multiple times without unscoping.

Who’s it not for?
The shaky handed – I do a lot of unscoping and body-shotting in normal play, so that’s a hit on the way I follow up on a target. You only really benefit if you’re a consistent head-shooter, which I handily am. I can adapt to this with a minimum of fuss.

Cleaner’s Carbine
Stats: 3 seconds of critical kills when you kill someone with this, but it has a 20% smaller magazin and a 35% slower firing speed. It can’t randomly crit. SMG replacement (finally), that matches the rifle for sexiness.

Why use it?
It’s another weapon that promotes accuracy, even as a secondary skill. The bonus crits over, if you’re a good aim, you have enough power to take down a heavy. You could follow up a headshot with it for a guaranteed crits.

Who’s it not for?
Those comfortable with the SMG’s output: 120dp compared to a base of about 80 with the new weapon, unless you’re sure of critting everytime you pull it out you’re giving up a quarter of your damage. That said, it’s damn sexy. Beggar’s Bazooka
Hold fire and release to load and fire up to three rockets in quick succession. + 3 degrees random projectile deviation. Overloading the champer can cause a misfire. Can’t collect ammo from dispensers. A handmade soldier rocket launcher; he’s homeless and made it out of garbage

Why use it?
Tough one. It’s built for conservation of effort: the soldier that likes to hang back a bit and pick his targets; but the spread deviation is important here and you can’t truly expect a med to long range shot to go where you want it to: I’ve seen rockets shoot past either side of a heavy. That said, I did get some use out of it when I kne there would be cluster of enemies around, and it’s a great way of suicide bombing carts. Charge, run, shoot three rockets, die gloriously.

Who’s it not for?
Those that pick their targets. It’s also nigh-on impossible to rocket jump with, as it takes a brief moment to charge the rocket into the chamber. And when you load more than three, the self-damage is pretty severe. Why use it: The top speed is incredible. If you’re able to use it to get to front lines early enough, it provides a nice advantage.

Who’s it not for?
Pretty much most Scouts: they live on speed and leaping; this punishes both. Yes you can get a high speed up, but the penalty of boost being wiped out onm jumping seems unduly harsh.

Why use it?
Most Scouts wuld benefit from the bump in HP, and if there’s a server with a decent Pyro then you’re in heaven. Even the fall damage stops the already weak class from chipping his health away.

Who’s it not for?
It’s almost an upgrade to the main pistol, depending on the number and quality of enemy Pyros. If you value speedy spamming, the Shortstop is still your best bet if you must change your pistol.