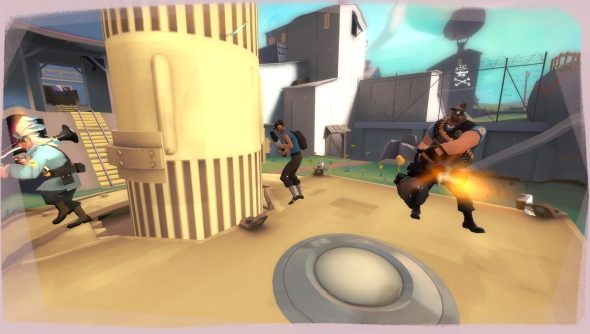 Poopy Joe died for this: the new map, Doomsday, is a memorial of how that brave monkeynaut tried, and failed, to become one with the universe. To traverse the sky and leave behind a trail so bright that it would hang like a blurry after image in our souls. He didn’t make it. Instead it’s where we fight: Red Vs Blu, battling for the honour to send the rocket on its doomed parabola. A new map that’s also a new game-mode: it’s what Poopy Joe would have wanted.

Doomsday is Valve’s attempt to bring life to the CTF stale game-mode. It has elements of both that and Payload Race: both teams fight over the chance to deliver one briefcase from its spawn to Poopy Joe’s rocket in the centre of the map. Getting there with the briefcase sets the rocket’s lift in motion, to allow the case’s precious cargo of Australium to be tipped into the rocket.

It’s a single-part map, quite compact map yet managing to feel pretty wide-open. You can head to the australium or the rocket from spawn, depending on if you want to fight for the briefcase, or defend the rocket site. It gives Demos and Engis time to prime their positions at the Rocket, while waiting for the delivery.

The flag spawn is open on all sides, and fed by three doors per team, with high, mid, and sneaky underground access. It’s a battleground with escape routes, basically: it being CTF, the winding corridors that deliver you to the loot gives plenty of options to run out. When you have the flag it remains your team’s till it respawns. Each leads to a middle section that funnels you towards the Rocket: the most direct route is across a bridge, but it can be easily covered on either side: an inset ledge there is a particularly good place for a demo to watch a primed bridge from, and it also gives a long view for a sniper to cover both it, the rocket, and some of the area around the rocket where most of the map’s fighting takes place. I managed three headshots on briefcase bearers who made it to the life from there, stopping Blu from moving the lift each time.

But the rocket is where things happen: everything leads here. If you head from the spawn it doesn’t matter what your goal is – stopping the enemy from getting to the lift, and protectig your own flag carrier from being killed is pretty much the same thing: the ledges that let you access the various stages of the lift’s ascent lets enemies and friendly alike access it. They’re good places for offensive and defensive sentries. It’s best to set some teleporter exits in the little corridors that take you up, as the angle of the lift makes it tough to get a shot on from anywhere other than being level.