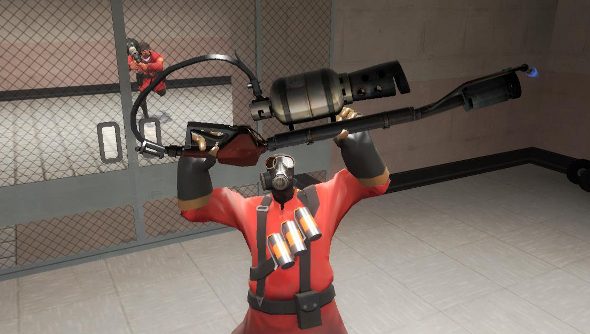 What do the Team Fortress 2 dev team and the current British government have in common, beyond a roster of caricatures? That’s right: neither have any time for feckless benefit thieves. Valve introduced the Item Drop System in 2009 to reward players for spending their time in-game, but have since discovered that unscrupulous types simply leave the game client running to bag extra winnings. Naughty, naughty.

As such, they’ve ushered in a new, targeted measure designed to circumvent these passive players when issuing rewards.

“As of last week, players can no longer receive item drops unless they are actively playing the game,” write the developers.

“As with any update, this change is meant to keep the game as fair, fun, and rewarding to as many players as possible. We will continue to examine how the Item Drop System is used, and make any adjustments as needed to benefit the players.”

So what does an ‘active’ TF2 player look like? Well, it helps if they’re connected to a VAC secured server. Other characteristics Valve recognise in present, playing humans are regular responses to in-game drop notifications, and a tendency not to run more than one instance of the game at once. Spending too much time in textmode is also proper suspish, they note.

Unless you somehow fail to meet those criteria, there’s no reason to worry you’ll be flagged up as an idler. Subject to the usual weekly cap, you’ll continue to earn hours towards random item drops.

There’s no punishment for going out and forgetting to turn off the game, either: your item drop counter will simply pause, and resume when you start showing signs of life again. Valve stress there’ll be no bans issued for idling – though the story will reportedly be very different for players using third-party programs to feign activity.

“This change is designed to make the TF2 experience equally rewarding for all players,” conclude the dev team. “The previous system had flaws that allowed players to collect rewards without actively playing TF2.

“The new system ensures you won’t become disadvantaged for playing TF2 the way you always have.”

Phew. Have you made a habit of running TF2 as a little box on your taskbar, accidentally or otherwise?