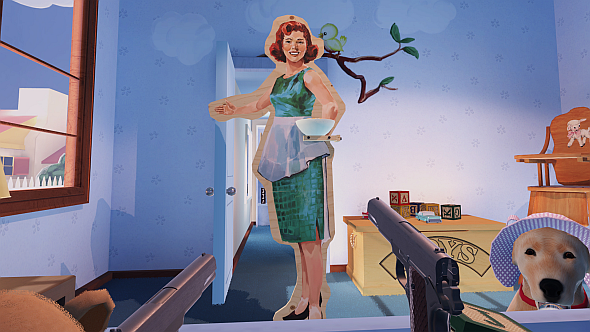 The American Dream is an upcoming VR game in which you have to accomplish everyday tasks – changing a baby’s nappy, flipping burgers at a neighbourhood barbecue – using a gun.

For more immersive adventures, check out the best VR games on PC.

The game is set in a 1950s world’s fair, funded and built by a group of leading gun manufacturers. Their vision of the future is not one of blocky robots and flying cars, but of a life in which everyone learns to use a gun for everything.

A talking dog named Buddy Washington is your guide through a narrative campaign of over 20 unique levels in which you’ll learn how a wide range of guns can improve your life. Your tools include pistols, shotguns, SMGs, and sporting rifles. Buddy is voiced by Michael Dobson, of DragonBall Z and Transformers fame.

Some gun advocates like to say “guns don’t kill people; people kill people,” emphasising that a gun is just a tool and, as Republican representative Vicky Hartzler wrote after Sandy Hook, “the cause, not the tool, should be the focus.” Gun control proponents could argue that, unlike tools such as knives and cars which can also be potentially dangerous, guns have no other purpose than killing. I’m guessing that, by challenging you to use a gun for anything and everything, The American Dream is hoping to make this point.

The American Dream is due for release on March 14, will cost you $19.99, and supports both Oculus and Vive. Check out the Steam page or the website for more information.