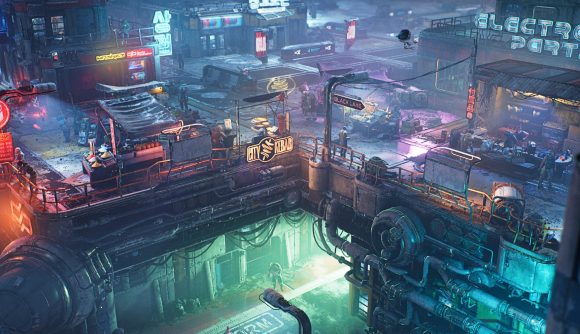 The rainy, ray-traced streets of The Ascent should be a bit easier to navigate soon. The cyberpunk co-op game is getting another patch in the coming weeks that will address several stubborn progression-blocking bugs, and should come with a performance boost as well. The developers have posted an update on their progress, and say the next update should be out soon.

Developer Neon Giant says it’s been closely monitoring player feedback and online discussions since launch, and that these have been “immensely helpful for our team.” That input has provided the list of priorities for the next update to address, which includes a selection of quest-related bugs and performance issues.

Neon Giant says players can expect the resolution for bugs that blocked the completion of three specific quests. In the opening few minutes of The Ascent, you get a quest called ‘Mutual Dependencies’ that sends you to find and eliminate a group of FullChrome gang enforcers who are going to attack a high-level underworld meetup. The problem is, in some cases the FullChromes never spawn, making it impossible to complete the second quest in the game.

The upcoming patch will address this, allowing players to continue on with the story. Fixes are also on the way for quest-blocking bugs in ‘Data Miner’ (mission five) and ‘Trace Protocol’ (mission seven).

The devs say they’re also implementing some performance improvements for PC, and have (finally) worked out the issue that’s been preventing ray-tracing from working for some Windows 10 users.

Neon Giant doesn’t specify exactly when the next patch is arriving, but says it “will be deployed shortly,” along with a full list of patch notes. The team says it’s committed to continue work on The Ascent “throughout the rest of the year and beyond.”