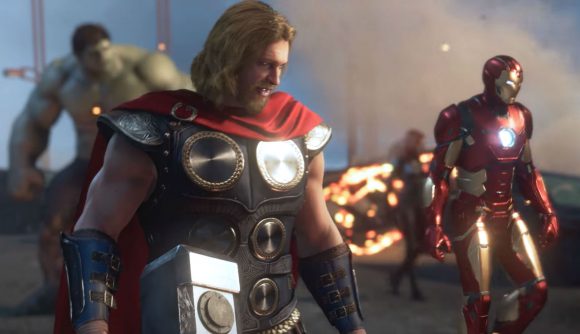 It was recently announced that upcoming Marvel’s The Avengers would be getting its first “public” airing – to a small crowd of San Diego Comic Con attendees. With no livestream of the event, many are undoubtedly still curious about what gameplay of Thor and the gang will look like, though it looks like we might now have an idea. Some people who got to see the footage appear to have filmed parts of it – and the clips are up on YouTube.

Some of the footage, posted on YouTube by channel PS5 Intel (via Nibel on Twitter), and which you can check for yourself below, shows off Avengers gameplay which starts off with Thor obliterating some hapless foes with his mighty Mjölnir hammer. Proclaiming “You are not worthy!”, Thor can be seen charging at his opponents and executing a variety of (very successful) combo attacks.

The Norse warrior god uses his glowing blue hammer to propel enemies around and deal some devastating blows once they’re down. At one point (around the 0:35 mark) he actually smashes one victim right out of the park, with the poor guy sailing into the distance, and then again at 1:24 he chucks his hammer at another, catapulting them out of his sight. Not one to bow to gravity, Thor can also be seen hovering towards enemies and handing out some combos mid-air.

The gameplay later moves onto Iron Man soaring across a suspension bridge, and then unveiling some of his own signature super moves both on the ground and in the air. The Hulk also makes an appearance, and, well, does what the Hulk does best. You can check all of this out for yourself below. Sadly, however, it doesn’t look like Black Widow or Captain America make an appearance in the footage’s actual gameplay.

IGN has reported that the gameplay footage will be released publicly next month (the week after GamesCom) – however, this is the first time that many people will have seen it, so it’s well worth a look. Hopefully we’ll get to see even more, including Black Widow and Captain America in action, after GamesCom.