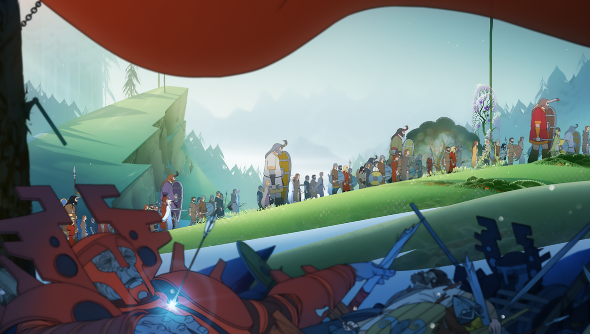 The RPG sequel is definitely happening, and it’ll be bolstered with a bunch of extra features, since it’s been smashing the stretch goals.

If you like moving people around tiles, our list of the best strategy games is just for you.

One of the unlocked stretch goals is Eternal Arena, a new combat-focused game mode where you practise your skills in quick play challenges. A Survival Mode will also test your combat skills in a series of escalating challenges.

Elsewhere, Ubin the Scrivener lives, thanks to another stretch goal ensuring he returns from his quest in the southern grasslands. You’ll also get a playable dredge, the enemies of previous games, in your party, which should be interesting.

This third entry in the Viking-themed RPG will wrap up the story that started five years ago, so it feels fitting that Stoic would return to the funding platform that made the series possible.

“We’re going full circle and returning to Kickstarter where it all began. In 2012, the backers were instrumental in bringing the saga to life, smashing our initial funding target that led us to increase the scope, fidelity and production values of Banner Saga,” said John Watson, co-founder and Technical Director at Stoic.

“We’re proud to be indie, and despite the stellar support we get from our publisher, Versus Evil, we’re not taking any outside funding to bring this series home, we’d love Kickstarter support to add additional features that are simply beyond our current budget.”

The Banner Saga 3 will take players beyond the wall of darkness to an all-new environment. Difficult choices and turn-based combat return, but you will face unknown threats in this new land.

The stretch goals will add more production values to the game. You can check them out, along with backer rewards, on The Banner Saga 3’s Kickstarter page.

Original Story January 11, 2017: The Banner Saga 2 released in April 2016, and it was clear from the first few months that the sequel wasn’t going to be anywhere near as commercially successful as the first game. In fact, those initial months saw the game sell a third of what the original did within the same period.

Being invested in the story is a huge part of the series appeal, and Stoic also admitted that a disappointing number of players saw the ending of the first game, thanks to a steep learning curve.

Not seeing the ending to the first game would likely factor into your will to pick up the sequel, but there are more variables at play when looking into the lower sales of The Banner Saga 2.

“We were quite exhausted at the end of The Banner Saga,” says Stoic founder John Watson in a GamesIndustry.biz interview. “Running a Kickstarter campaign is extremely demanding. There’s the setup portion, there’s running it for the month, and then for the rest of the development you’re supporting that community, answering questions, giving updates. It’s a full-time job, and we didn’t have anybody dedicated to being that community manager. It was a scary prospect.”

Still, Stoic are hoping to learn from these mistakes and plough ahead, trekking across the snowy wastes once more, crimson banner cutting proudly across the horizon. They’re going to make The Banner Saga 3, polishing off the trilogy.

“We have to do it,” Watson says. “We set out to make this trilogy. We can’t leave the story unfinished.”

For this, Stoic are creating a new outlook. Instead of looking at the sales of the individual games in the series, Stoic are changing their outlook and trying to think of the bigger picture.

“The launch of The Banner Saga 2 drove sales of Banner Saga,” Watson explains. “If you look at The Banner Saga as a franchise – all the platforms and both the games – it’s generating about the same revenue… It’s like building a wedge. Banner Saga 3 might sell a third of what Banner Saga 2 did, but it should lift up the other games. That’s what we’re betting on.”