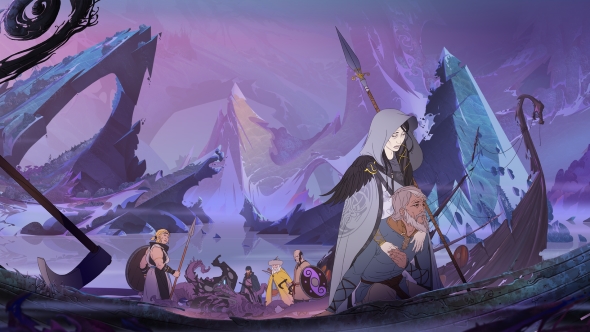 Plenty of the ingredients that make The Banner Saga the harrowing dish it is stay constant across the travels you go on with its caravan: the harshness of the world, the moral dilemmas, and don’t forget the perpetual misery. But between the first and second games, developers Stoic put together a number of combat improvements that made the sequel feel that bit more refined. The same can be said about The Banner Saga 3, which features a novel mechanic that ties directly into its doom-laden story. Prepare to fend off The Darkness in more ways than one.

The Banner Saga series is, of course, one of the best RPGs on PC.

As a mysterious cosmological phenomenon that has been part of The Banner Saga since the first game, The Darkness is a major part of the plot in this third and final chapter, as you might expect. One of your caravans is literally travelling through it, and so the characters escorting it will be regularly attacked by soldiers that The Darkness has warped and mutated.

“Everything you are going to be fighting is going to be nasty and weird,” Arnie Jorgensen, co-founder of Stoic, says. These enemies are based on foes you have fought before, but their purple, ragged skin indicates that The Darkness has turned them into something much more fierce. “They have new passive abilities since they’ve been warped,” he adds. “They have heightened statistics.” 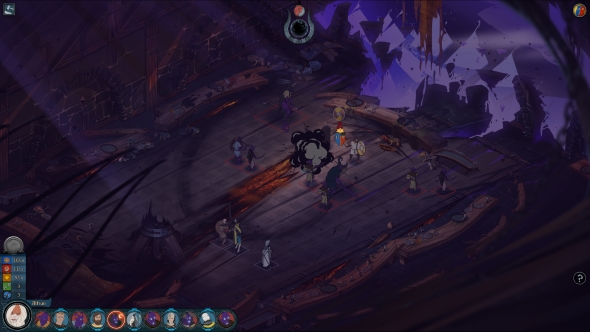 A fight in Darkness-covered lands is characterised by more than fearsome foes, though. “It’s a race against time because The Darkness is encroaching,” Jorgensen explains. “In combat there is actually now a turn counter, where literally in each fight you are racing against the clock as well. If the turn counter reaches zero, another wave attacks you.”

This means that the enemies present on The Banner Saga 3’s chess-like battle grid at the start of combat are not the only enemies you have to worry about. As the Darkness counter runs down, new creatures will deploy onto the battlefield, which offers an additional challenge to deal with – especially in situations where you have been unable to clear the grid of all pre-existing enemies.

“If you clear the wave before the counter reaches zero you can flee,” Jorgensen reveals. “If you really love combat, you can fight longer and try to get an item from one of the minibosses in the next wave.” Battle is a risk/reward situation in most RPGs, but Stoic’s new ideas for The Banner Saga 3 appear to be toying with this dynamic in even more thrilling ways. 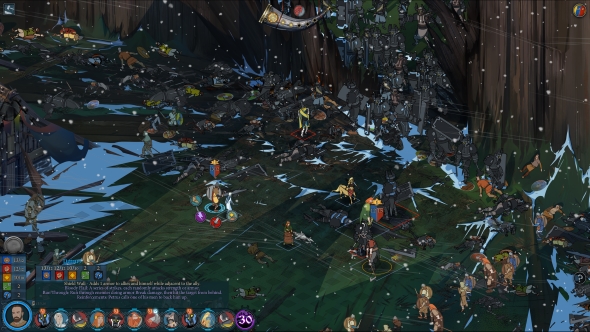 While the series has always promoted character synergies, The Banner Saga 3 is pushing that even further by taking The Horn away. This news will likely alarm fans, as the magical device has been key to being successful in combat for two games now, allowing you to grant extra willpower to characters after a kill. Replacing it is a system that lets characters themselves buff others with extra willpower, meaning positioning on the field is of paramount importance. For example, a character with the ability to sing of your heroic deeds will inspire units in close proximity to them.

Further battle changes are introduced via new characters, such as the witch Alfrun. “She’s the first character who can give strength to another character,” Jorgensen says. “It’s a bit overpowered, but in The Darkness you’re going to need it.”

As if that were not powerful enough, she also has the active ability Ride The Lightning, a magically-fuelled dive attack. “She jumps in, does damage, and gets back,” Jorgensen explains. “The further she travels, the more damage she does. So you might want to pose her behind a tank, jump in, do damage, and get back.” It is a move that is typical of the series’ combat roles, which challenge you to think spacing and movement tactically. 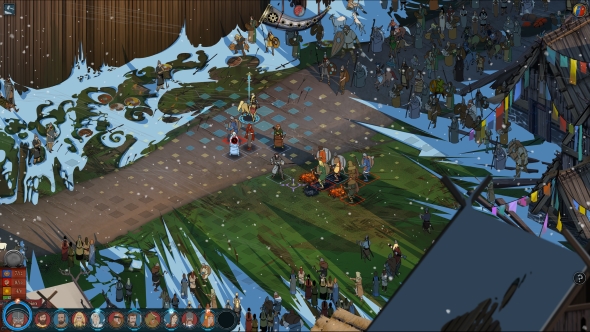 Joining Alfrun on the battlefield is Juno, a long-standing character in the series who is making her combat debut in The Banner Saga 3. Anyone familiar with her will be unsurprised to learn that she has a unique trick that makes her a powerful ally.

“Juno has been a mysterious character throughout the saga,” Zeb West, producer at Stoic, says. “She seems to know what’s been going on but she’s been really tight lipped. Now she’s playable on the battlefield. An interesting ability she has is that, if she dies, she goes into this ghost world and awakens.”

When in the spirit realm, Juno can move to fonts on the battlefield and collect dark energy. This matter is able to resurrect Juno and put her back in the fight. “She can get one of [the fonts] and get one strength and one willpower and go back to her body,” Jorgensen explains.

“Or she could say ‘I’m gonna try for more’ before returning to her body. But the game is that, if you lose combat while she’s in the spirit realm, you lose. If she can get back to her corpse she can fight on.” Clearly, there is a trade-off at play here: do you spend more time gathering strength in the spirit realm and potentially miss your chance to resurrect and keep the fight going, or come back early but woefully underpowered?

Stoic are aiming for a cataclysmic, last-stand-of-humanity conclusion for The Banner Saga, and that comes through with the changes to the game’s battle system. It seems safe to assume Stoic will deliver the same heavy sense of apocalypse with the narrative, so have plenty of pick-me-ups at the ready for when The Banner Saga 3 releases this summer.