Banner Saga is being transformed into a board game, it turns out, and coincidentally I now desperately want to play a Banner Saga board game. Originally announced a few months ago, a Kickstarter campaign is imminent.

The game, Banner Saga Warbands has been in development at MegaCon Games for almost a year, but to get the funding to manufacture the thing they need to go down the crowdfunding path, hence the impending Kickstarter launch.

Banner Saga’s combat certainly lends itself to tabletop shenanigans, with it’s battlefield grid and turn-based scraps. It’s a bit like very angry, hairy, fantasy chess. The game was interesting outside of conflict as well, however, and I wonder if, and how, MegaCon are going to incorporate the caravan management aspect and consequence-driven narrative.

“[MegaCon] have created a miniatures board game that captures the spirit of The Banner Saga where hard choices have serious consequences,” reads the press release. “These last couple of months the prototypes for the miniatures, boards and cards have been worked on and finalized. Now, they are geared up for the Kickstarter campaign where the teams hope to secure funding to go to manufacturing.”

The Kickstarter will begin next week, on November 12th, but in the meantime, look at these lovely miniatures: 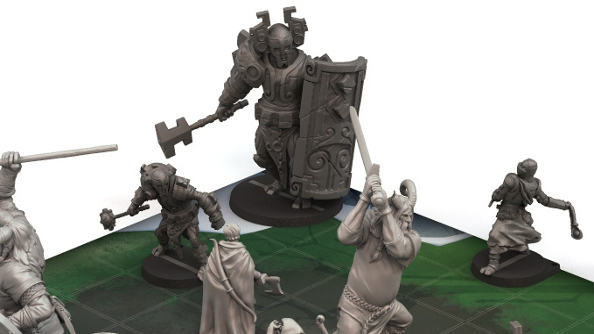 A new site has been set up for the board game, which can register at for more news.