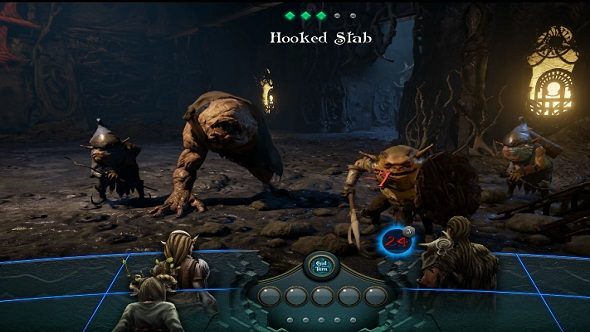 Returning to dungeons with a lute in hand, InXile Entertainment have given RPG fans a first look at the combat system for The Bard’s Tale IV. While still very much a work in progress, this snippet of battle shows off how InXile are attempting to rework old school turn based combat to make it fresh for a contemporary audience.

Swords and sorcery your thing? Have a gander at these other PC RPGs.

The video (shown above) acts as a typical example of a standard dungeon encounter, where the player’s party is tasked with delving into a goblin-infested stronghold to pinch some loot. The ability system is shown briefly, where party members can use specific out of battle skills to continue dungeon progression. In this case, the party use a special spell to rebuild a crumbling stone staircase in order to progress forwards.

After some light in-party dialogue, the group finally stumble across some enemies and go into a battle. Combat in The Bard’s Tale IV is similar to games like Dragon Quest or Earthbound, with the party’s back facing the camera while the enemy stares menacingly towards you. There is a grid based positioning system, with both the enemy and the player being able to shift themselves to attack certain areas of the grid. In this footage, the party has five action tokens to use in battle, with moving and attacking taking one token each. It seems your party members can attack in any order they like; you just need to keep an eye on the cooldowns on your attacks.

Certain attacks can reposition targets, allowing for specific skill combos to deal damage. In one instance, the party’s mage flings a goblin from one side of the grid to the other, so the warrior can do a large sweeping strike to attack three enemies at once.

Already in this small combat snippet, there’s a lot of charm to The Bard’s Tale IV. Characters chat to each other mid battle, enemies react to player moves like laughing when the rest of their party is shrunken or hiding in fear after a big attack. If the game is able to continue its charm offensive, it looks like it will be quite the rollicking adventure.

It is clear that the game is very much a work in progress though, as there is still problems of characters popping up and down during dialogue which inXile’s very own Brian Fargo points out in the YouTube comments. It’s still early days for The Bard’s Tale IV so expect things to change as development continues.