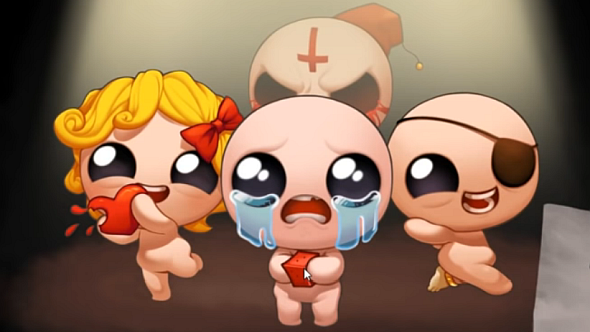 The Kickstarter campaign for The Binding of Isaac: Four Souls, the card game set in the Binding of Isaac universe, has smashed its original target – 20 times over. The game, which has been developed by original series creator Edmund McMillen, has earned over $1.1 million with more than two weeks of campaigning left.

That’s not too surprising, as Four Souls hit its original $50,000 goal within 90 minutes of going live. It’s been steadily growing since then, and many stretch goals – which McMillen has turned into a series of IRL minigames for fans of the series – have already been completed. At time of writing, the campaign has earned a total of $1,168,808, with 15 days left to back it.

According to the rules as given on the Kickstarter, two to four players will take turns playing loot cards and using items to kill monsters, which in turn yield more loot, and sometimes souls. The first player to end their turn with four souls wins. Cooperation, bartering, and betrayal are all encouraged.

McMillen says the seed of an idea for an Isaac board game was planted over a year ago, when media company Studio 71 approached him with an offer to develop one. Nine or ten months later, when sick with flu, “the basic structure for a Binding of Isaac card game started taking over my brain.” It sounds like the rest of the design was completed in a feverish activity: “within five days [he] had roughly 200 cards,” and was testing them via paper sketches. “Even at this phase the game was fun – every play session felt totally new, dynamic, and interesting,” he says.

It sounds like the game will stay true to the spirit of Isaac, with four players joining forces to take down giant bosses, bartering their way to more items, and backstabbing one another “once someone started inching closer to having four souls.”

Ok we hit the goal in an hour 15ish min. Holy shit… so I had some stretch goals done and I’ll try and get the first wave up but I didn’t expect this so, I gotta sleep and all that but check the page and there should be some stretch goal unlocks soon 😉 https://t.co/HqiejgUbh5

Afterteasing the new game on Twitter over the last two weeks, McMillen made the mistake of replying “kinda” to someone who cracked a joke about 2018’s most prevalent gaming trend, forcing a firm denial that it would be a Binding of Isaac battle royale.

When Four Souls was finally revealed, the speed with which it was fully funded took McMillen by surprise – he hadn’t even published his stretch goals when the initial target was hit.Check out the Kickstarter herefor much more on how to play, a preview of a few cards, or to pledgeeven moremoney to the game.