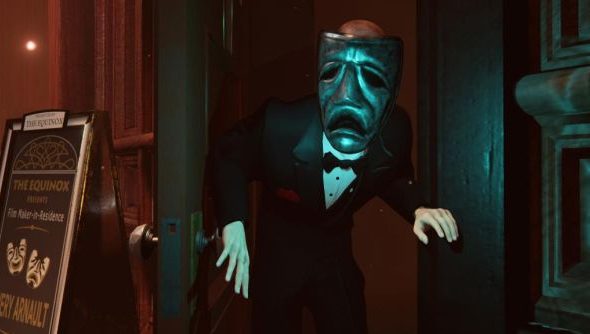 I’d like to be able to tell you that Ken Levine has thrown his support behind his former staff by donning a single black handwarmer and performing Michael Jackson numbers to camera.

Instead he’s walked the less obvious path, and recorded a short, static message of solidarity for Day for Night Games’ surrealist vaudeville adventure, The Black Glove. Think of it as an IRL audio diary.

Day for Night thanked Levine for his endorsement in a recent Kickstarter update – rather bleakly titled, ‘SAVE THE BLACK GLOVE FROM CANCELLATION’.

“We spent years working with Ken, learning how to make story rich, immersive environments like BioShock’s Rapture and BioShock Infinite’s Columbia, so it means the world to hear he believes in us and our project,” they wrote.

“I spoke to Ken on the phone and he said he liked the cool, surreal Twin Peaks feel of The Black Glove and had been thinking about how David Lynch promoted the show with a simple hook: ‘Who Killed Laura Palmer?’

“He suggested that we come up with a simple statement to boil the game down to its essence and grab people’s attention.”

The statement Day for Night have come up with is ‘The answer must lie in the past…’, which certainly highlights The Black Glove’s forensic kinship with a couple of Irrational games. Though perhaps ‘View the world through a magic, secret-spilling hand’ would be more direct.

In the nowVR-supported The Black Glove, you play as the new curator of a 1920s-style theatre filled with strange digital exhibits. The monsters on display are breaking their bonds and filling the place with “strange, unsettling surprises” – and only a Glove of Metaphysics +1 can help you counter them.

Can you help Day for Night, do you think? They’ve still tens of thousands of dollars to go to their goal, and just over two days to get there.