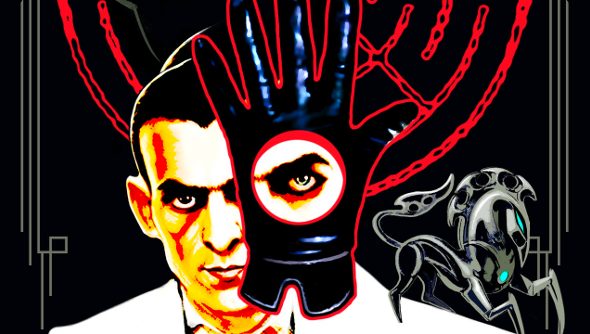 The Black Glove is a game made by former Irrational developers, and there’s a lot of BioShock in it: the masked madness of the splicers, and the vaudeville vibe of Sander Cohen’s den or Infinite’s fairgrounds.

But for some reason it’s really struggling on Kickstarter. Day For Night Games are pulling their fingers out for the campaign’s final few days, introducing a bunch of new physical rewards and support for the Oculus Rift.

This might look like a last ditch promise – and Day for Knight acknowledge the situation is somewhat desperate – but VR actually sounds like a strong match for The Black Glove’s surrealist art space.

You play as the new curator of a 1920s-style theatre, where the creatures and characters of its digital exhibits appear to be leaking out into a first-person world.

Every one of the theatre’s rooms, drawers and corners holds a strange and unsettling surprise, and you’ll be able to introduce a few of your own via the titular glove – a powerful artifact which grants you the ability to bend space, time, and other as-yet-undisclosed laws.

Unfortunately, The Black Glove isn’t even halfway to its $550,000 goal yet. But a lot can be accomplished in three days, wouldn’t you say?