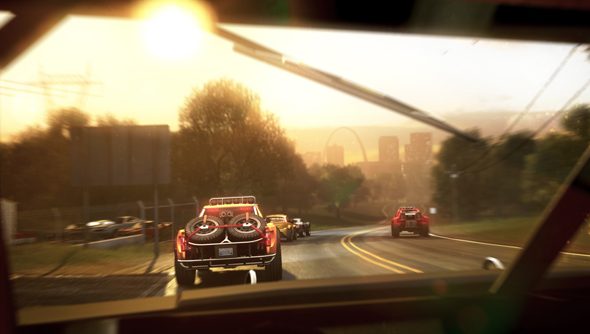 In The Crew Ubisoft want to create a racing game with real ambition: a simulation of the best bits of the United States for you to race through at over 100mph. They know their stuff in building cities and worlds, either in the Far Cry or Assassin’s Creed games, but The Crew’s ambition is ludicrous: the game’s New York alone is the size of GTA IV’s Liberty City.

We’ve been hands-on with The Crew beta, and it’s looking good. Here’s everything we know.

The Crew map is massive

The Crew’s premise sees you rising up the ranks of Detroit’s illegal street racing scene with a gang named the 510s. But Motor City is just the spiritual starting point in a 6,213 mile road trip that takes in America’s most famous drives – and plenty of lesser-known makeshift racetracks besides.

The game takes place across a totally open USA. While a 1:1 recreation is beyond Ivory Tower’s engineers, the developers have put together a creative collage of the country that links up some of its most iconic locales. It’s intended to be a Best Of for anybody who’s ever dreamt of a summer spent behind the wheel of a thirtieth-hand muscle car, or decided against taking San Francisco’s slopes far too fast IRL.

Ubisoft haven’t skimped on scale, however. It’ll take 45 minutes to drive from coast to coast in the game’s fastest car. And whichever way you want to slice it, The Crew outstrips gaming’s most-beloved open worlds for sheer landmass.

Not only is Ivory Tower’s USA larger than GTA V’s Los Santos, Red Dead Redemption’s Wild West, Forza Horizon’s Colorado, Need for Speed Rivals’ Redview County, Far Cry 3’s tropical island and The Elder Scrolls’ Skyrim – it’s bigger than all of them combined. With any luck, that size will translate into big fun.

The Crew developer is the team behind Test Drive Unlimited

The Crew has seen Ubisoft let an independent studio loose with an open world sized budget. That’s unprecedented. But Ubisoft’s faith might just pay off: Ivory Tower were founded around veterans of the game that laid the tarmac for the likes of Forza Horizon, and they’re supported on the project by Ubisoft Reflections, who made quite a dent in the bodywork of arcade racers themselves with 2011’s Driver: San Francisco.

Missions come in seven different varieties. A Go To will have you speeding to a distant location; Outrun is its checkpointed variant. Collect asks players to pick up items dotted around the map; Get Away is your classic police escape. Follow missions will find us chasing down an evasive vehicle, and Takedown will see us ramming it to bits. Races are self-explanatory – but they can take place on-road, off-road, or in deep snow.

Between these, you’ll find some 500 miniature skill missions designed to test your precision, nerve or (occasionally) head for heights.

If you choose to ignore the sights and sounds in your wing mirrors, you’ll still find a 20-hour campaign with narrated, story-driven missions to play through, more than 60 PvP races, and a level cap of 50 to best.

Levelling is abstract, not tied to cars – but the idea is that you can pick one vehicle and take it all the way through the game if you so desire, upgrading it as you go.

It’s an MMO, and you won’t be allowed to forget it

Where Driver and Test Drive offered solo drives, The Crew surrounds you with other players and plenty of ways to interact with them beyond the initial instinct for headlong crashes. Expect co-op, PvP, and even the racing genre’s take on raids.

Players will be asked to join a faction within the story’s first couple of hours – the Wolves or the Eagles. Some faction missions are simple ten-minute races with your newfound comrades, but others are four-and-a-half hour marathons with rewards to match: cash, exclusive parts and more missions.

You’re not going to be short of mounts, obviously, but that hasn’t stopped Ivory Tower from integrating their own take on fast travel too – a Google Maps-ish ‘satellite’ view that can take you from New York to Miami quicker and much more comfortably than a red eye flight.

Arcade racers tend to leave the heavier end of customisation to the sims. But The Crew is an MMO, and MMOs are all about tweaking builds and showing off status symbols in front of other players. Each car will have 20 parts to swap out, and 11 of them will influence performance. As our Jules learned in hishands-on with The Crew, two level 50 Ford Mustangs can wind up driving utterly differently.

Car parts and perks will be provided as post-race rewards, and you’ll want to kit out a car with the appropriate spec for your terrain. Street spec will see you well-covered for inner-city racing, but performance spec drivers will win out if they can handle the trade-off understeer. Circuit spec, meanwhile, will provide a better balance of handling and speed for urban endurance races.

Dirt spec offers the tough rims and uprated suspension necessary to enjoy The Crew’s sprawling American countryside and deserts in the drift-heavy way they were intended – while raid spec is the “go-anywhere, bash-anything” loadout that’ll hopefully suit fans of the dormant Driver series.

All that rushing doesn’t extend to its release date

The Crew was originally penciled in for a pre-March release date. But beneath the soft French lilt that Ubisoft CEO Yves Guillemot brings to investor calls lie nerves of steel. The game was delayed once so as “not to compromise on quality” – and another time to incorporate closed beta feedback. The Crew’s new December release date means the game won’t be choking on the dust of Assassin’s Creed: Unity and Far Cry 4, and should launch with the packed servers its social mechanics need.

The Crew release date is December 2, 2014. Check our write-up of The Crew’s system requirements, which come in minimum, recommended and optimum flavours. Pre-order here.