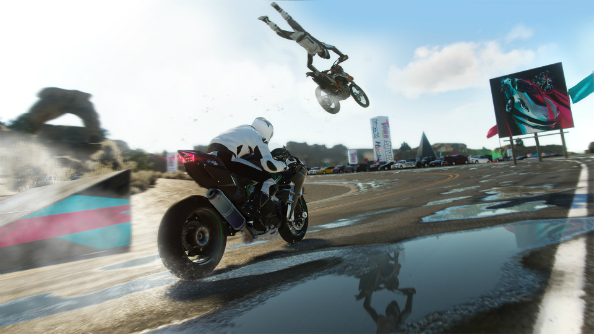 Imperfect but compulsive MMO/racer The Crew just got its first meaty, MMO-sized expansion. Wild Run is out now, adding motorbikes and new four-wheeled vehicle types alongside a new batch of events called The Summit. You can try it out for free for a couple of hours if that synopsis didn’t prompt you to open a new tab and google the Futurama ‘take my money’ meme.

Fancy yourself as a dab hand behind the wheel? You’ll enjoy our best PC racing games.

While everyone in console-land was going nuts over some clever parody of lore-bereft MMO grinding called Destiny last year, I was mirthlessly progressing through my own garguantuan grind in The Crew. Because I’m a bit wrong in the head like that. The handling model wasn’t perfect, and the solo mode story often couldn’t help but stumble into the domain of the straight-to-DVD action movie, but there was something about unlocking car parts with stat boosts and taking your motor into online races with a distinct unfair advantage that really clicked with me.

Wild Run also addsdragster, drift, and monster truck vehicle types, so there’s now a) even more scope for turning a Corvette into something unrecognisable, and b) a handful of new event types which require those vehicle specialisations.

Those challenges comprise The Summit, the meat of Wild Run’s new content. You’ll need to qualify in one of two weekly events before competing in a monthly Summit Finale, where the big loot’s doled out. I’m genuinely a bit excited just thinking about unlocking platinum brake discs again. Help me.

The Wild Run expansion itself costs £25, and that’s not a minor outlay. However, Ivory Tower/Ubisoft Reflections are also putting out a free update that all Crew-ers can enjoy. It includes new weather and lighting systems, new spec options for existing vehicles, and a handling overhaul which aims the following:

I’ll be diving into Wild Run shortly to test those claims out, and not without enthusiasm. It wasn’t perfect upon release, but Ubisoft, Ivory Tower and Reflections have obviously made a commitment to support and improve The Crew post-release. It’s appreciated.

For a comprehensive breakdown of new paid and free content, check out the patch notes.