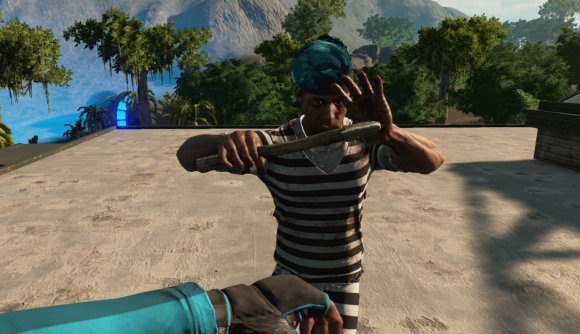 July 26 The Culling’s day one server uses a different app ID on Steam compared to its mainline build, which we had failed to notice, so our initial report on its recent figures was inaccurate. We apologise for the error, and have updated the story below.

The Culling 2 released earlier this month and quickly proved to be a substantial flop. Poor reviews and low player counts saw the game get pulled just eight days after release. Developer Xaviant instead announced it would refocus on the original The Culling.

In an attempt to boost its player counts, Xaviant rolled the game back to a ‘Day One build’ – literally the version of The Culling released on early access in March 2016. That version claimed to be the first-ever standalone battle royale, and was much-loved for its unique, melee-focused combat and small player count. This plan seems to have had mixed success, with a peak of 224 players yesterday. That’s down from a peak of 845 just after (re)launch on July 21, and well below The Culling’s all-time peak of 12,622.

The Culling 2 was pulled from sale due to low player counts and complaints that the game was too similar to other battle royales, lacking the melee-focus, small map, and more intense play of the first game. Xaviant director of operations Josh Van Veld said, “one thing that has emerged very clearly for us is that The Culling 2 was not a game that you asked for, and it’s not a game that you expect as a worthy successor to The Culling.”

The developer had previously pulled support from the first game to focus on the sequel, which Van Veld admits was an error.

Xaviant re-launched the game as a ‘day one build’ on July 19 – here’s Steam DB’s data on that, which is not to be confused with the data for the main game (like we did). Note also that servers have been down for maintenance in the last day or two, which will also have had an impact on player count.

Things may pick up for The Culling as the game transitions into free-to-play, though for the moment Xaviant have not announced when that will happen.