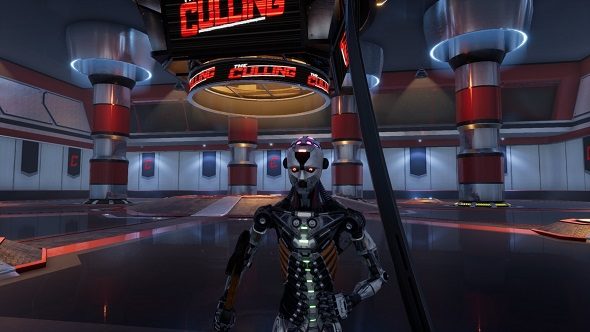 To coincide with its latest update, developer Xaviant has announced that competitive survival game The Culling will be free to play this weekend. Starting at 1PM PDT on Thursday, this free weekend will run until 1PM PDT on Sunday, when the cannon sounds and poison gas begins to leak from your PC.

Our list of the PC’s best survival games should prepare you for any Hunger Games-esque situation.

The update for The Culling reworks the game’s combat by bringing back stagger and finally adding a combo system. Players now become staggered if they attack a blocking opponent, replacing the old Weakness/Feeble system. According to the developer notes regarding this update, staggers should allow “overcome any HP deficit through skillful play”, rather than being forced into making bad trades with the old system. As for combos, don’t worry about learning frame data or anything like that, this update merely allows players to follow up a successful shove, attack or block with an quick additional action. This should reward players for timing their blocks correctly and also open up their options for a counter-attack.

For players who want to practice their blocks and combo options, Xaviant are also adding an offline survival mode to The Culling with this update. This mode allows dedicated brawlers to practice against wave after wave of bots in a special-themed arena. Trainee survivors can test their might in Basic Survival, while battle-hardened veterans can jump straight to Advanced.

This update finally adds full controller support to The Culling as well, with all game menus supporting controller navigation and multiple controller layouts. As precision aiming is rarely needed while scramblingfor your life, controller players shouldn’t be at a huge disadvantage when fighting online. You can find the entire list of changes coming in this patch over on The Culling’s Steam page.

If you areimpressed bythe free weekend, The Culling is 33% off until 10AM PDT on Monday, going for $16.49/£12.53. The sale is not currently live, but will activate along with the free weekend later today. With PlayerUnknown’s Battlegrounds currently ruling the survival game roost, this free weekend may cause a few players to jump ship.