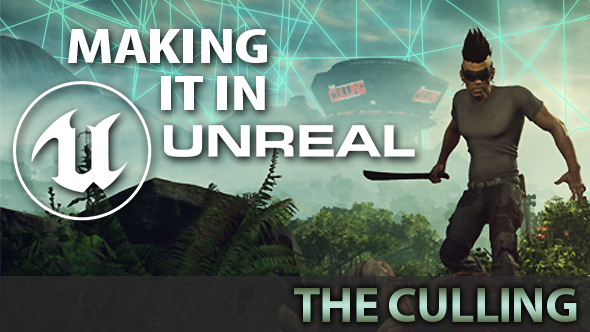 The Culling is a vicious game show in the mode of The Hunger Games or Battle Royale, except that you’re not viewing it from the comfort of the cinema – you’re on the other side of the camera, scrapping for survival and entertainment with your fellow contestants.

Prefer to take down your foes from afar? Here are some classic first-person shooters.

As a multiplayer melee spectacular, pretty much all of The Culling’s fun is dependent on second-to-second decisions. Players need to be able to hear their targets before they see them, make split-second reactions when a cudgel comes their way and – crucially – never be interrupted by lag. None of which, it turns out, is a given. Here’s all the hard work that’s pulled The Culling through its first year in Early Access. 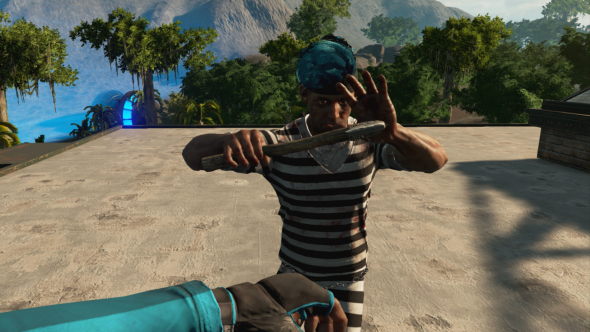 Unreal Engine 4’s primary advantage for the Culling team has been Blueprint – a simplified visual scripting system that has enabled designers to iterate quickly on core combat with only minimal assistance from engineers.

That’s been important for a combat system that’s required a lot of tweaking.

“The wrong change in the wrong place can send you into those playstyles you’re trying to avoid,” says senior systems designer Steve Caywood. “If movement speed is made a touch too high, you suddenly have a spinning dance for melee combat instead of a toe-to-toe brawl.

“Just a bit too long for a weapon to be in its damaging state and suddenly you have a very jousty feeling to combat as people try and manipulate the hit detection. Not to mention, considering all this with network latency involved can make it a challenge.”

Since The Culling revolves around close ‘n’ nasty melee fighting, it’s more sensitive to latency issues that a traditional multiplayer FPS would be.

“Players are much less forgiving of a missed punch or baseball bat swing than they are of missed ranged attack,” director of engineering Aaron Molina points out. “Synchronizing what the player sees and the server’s view of the world is extremely important when resolving a melee attack against a player that is blocking or just starting to engage his block.”

To that end, Xaviant have made extensive use of an in-engine tool called the network profiler.

“The network profiler has been invaluable when tracking down problem actors that replicate too often or really don’t need to be replicating at all,” says Molina. 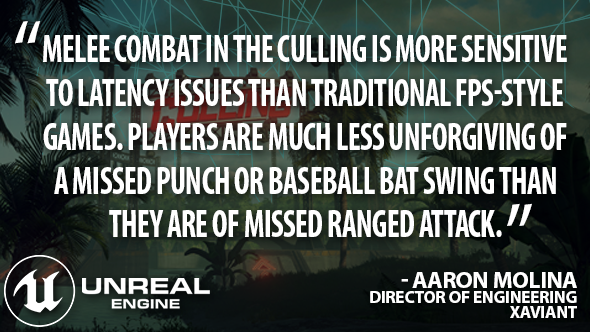 Based on that description, it’s easy to imagine the profiler as Harrison Ford’s Deckard, prowling neon streets in search of bandwidth replicants. And perhaps that’s not too far off the mark.

The tool can report on network traffic and performance as The Culling runs, uncovering troublesome ‘actors’ – the game dev name for any object placed on a map – that might impinge on bandwidth. Once they’re exposed, Xaviant can deal with those actors and keep bandwidth below a reasonable threshold.

“Network bandwidth is always at premium and staying within budget is a full-time job,” says Molina. “We’ve built a robust combat system that allows us to adjust timings on our attacks and blocks to account for network latency.” 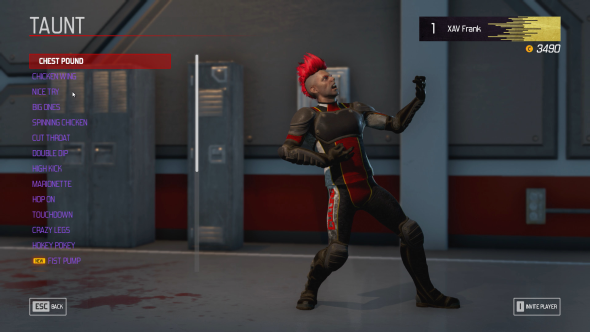 The Culling is a televised game show, and nobody wants to leave behind a poorly-dressed corpse – so The Culling’s character customisation offers a sizeable wardrobe to players. It’s only been possible thanks to some economical decision-making on Xaviant’s part.

“To avoid managing hundreds of files we are using a mesh offset system, with Blueprint tags and vertex paint, to create custom clothing offsets that we can mix and match with only one body mesh,” says senior character artist Kevin Murphy.

“We set up a color and logo system where we have arrays of colors and textures that can be slotted into a category of items, but overridden for custom options.”

For maximum flexibility, all of The Culling’s characters use the same rig – that is, the skeleton that defines their joints and movements. In this way they can share animations and custom sockets when attaching accessories like hats and backpacks. 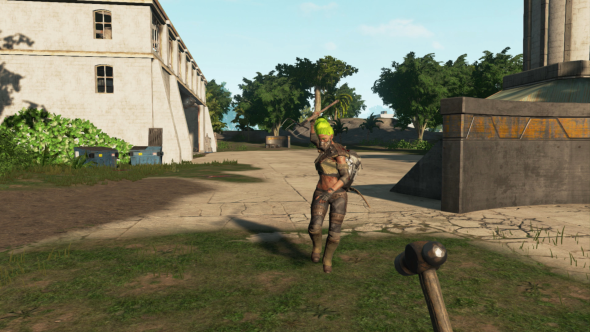 Sound plays a crucial role in The Culling. Every participant makes noise when sprinting or slamming doors – and even the clatter of crafting can draw the deadly attention of nearby players.

Unreal Engine 4 has a sound attenuation system that handles the natural dampening of noise as players move away from its source – but Xaviant have had to “balance what is realistic and what makes the game fun”.

“In early playtests, we found realistic volume falloff caused us to never hear other players,” elaborates senior audio engineer Britt LaReau. “So, we had to lean towards hyper-real and refine after multiple playtests. The audio cues are also adjusted based on items or perks used by the player.”

The Culling is available in Steam Early Access. Unreal Engine 4 is now free.

In this sponsored series, we’re looking at how game developers are taking advantage of Unreal Engine 4 to create a new generation of PC games. With thanks to Epic Games and Xaviant Games.