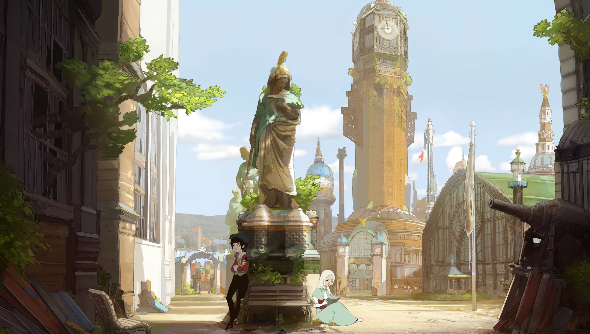 Emily, a tomboyish thief from the seaside town of Scarborough Fair, is on the run. She’s just botched an important heist job, and she and her partner Will are now trapped in the town’s clock tower. The police are just minutes away. Separating the duo from freedom are a series of elaborate puzzles and some meaty dialogue conundrums.

This sticky situation is an early sequence in The Devil’s Men, Daedalic Entertainment’s new adventure game. The studio is known for making traditional point and click games that cling to the 1990s rulebook like chewing gum on freshly-laid carpet, but The Devil’s Men is a departure. 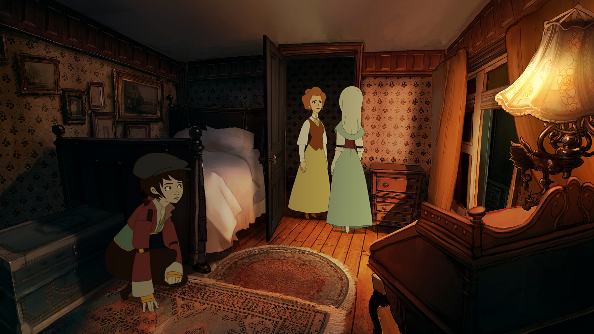 It has two stars; Emily, who we’ve already been introduced to, and Adelaide; the daughter of this steampunk Scarborough’s answer to Sherlock Holmes. Like Double Fine’s Broken Age, control can be swapped between them, and both have stories that start entirely separately. Eventually their fates will begin to entwine, but their goals in life are in conflict. Emily is looking to climb the ladder in her career of crime. Adelaide is determined to avoid the clutches of crime whilst she explores its darkness during a murder investigation. Your choices as both throughout the game will have a noticeable effect on each other. Things you do as Emily could make life harder for Adelaide, and visa versa. This structure allows you to orchestrate their fates in small but significant ways. For example, you could fluff up a puzzle as Emily in order to make sure that Adelaide has a better chance at achieving her goals.

With this kind of system in place, you can probably already guess that The Devil’s Men is a game with a branching storyline and a heavy emphasis on choice. You can sense Daedelic are following Telltale’s lead: dialogue doesn’t follow the traditional mould of saying all options until the right one is found; everything you say could affect the mood of the conversation and provoke actions from other characters. 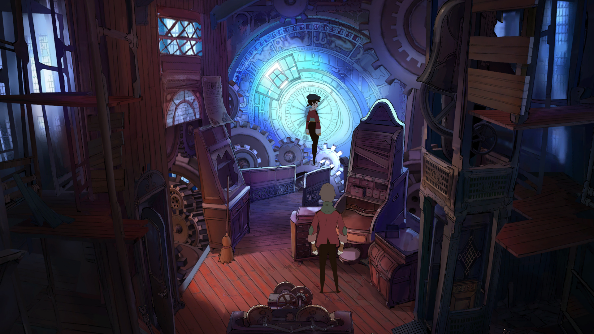 One section I played sees Emily and Will stand at the base of Scarborough Fair’s clock tower, where they realise that the only way of escaping the fuzz is to climb upwards. There are two avenues to get there: a ladder that somehow needs to be unfolded, or a lift that needs powering up. Will is already annoyed with Emily for botching the heist, and so continually belittles her while she investigates both options. Your conversation options allow you to try and assert Emily’s position as Will’s superior, or even threaten him. Choose aggressive phrases and Will’s response won’t just be appropriate, but his further behaviour begins to change. If you claim to be in control but become stuck on the puzzle, Will starts to tell you how to do it, suggesting you are incapable. This works as a useful hint system, but it’s wrapped up in such condescending dialogue that your relationship with him begins to sour. It’s a brilliant way of making your actions – or lack of – feel impactful on the world.

With the ladder unfolded and the two in the top of the tower, an escape must be made through a maintenance hatch in the glass face of the clock, blocked by interlocking, spinning cogs. This puzzle has two solutions. The clock machinery can be simply turned off with the pulling of a lever, but the lever is padlocked shut. The lock can be picked with a bobby pin – an item that can be found and used much like in an RPG – but using the pin will break it. If you want to save your pins – or perhaps you never even found one – you can take the more complicated route. This involves jamming the cogs with a broom, but you’ll need to get Will to hold one of the cogs in place first. Should you have pissed him off in the previous puzzle he’ll put up more resistance before agreeing to help, making dialogue a fun maze of phrases that could set him off like a buried landmine. 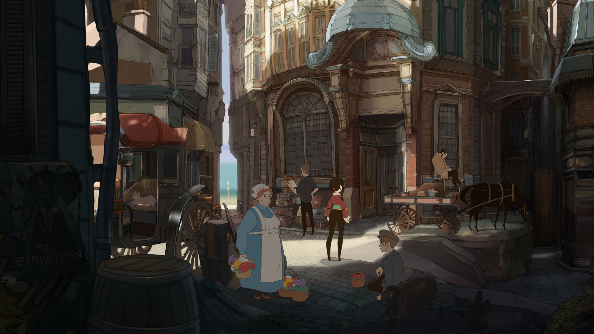 Getting Will to help out has much larger repercussions, however. Whilst holding the cog in place, the machine slices through his palm, leaving him with a gaping wound. As the game progresses, Will stands the chance of picking up an infection, that could lead to him becoming terminally sick. With him on the brink of death, later in the game Emily could be forced to decide how to deal with Will’s fate. Suddenly, how you approach every puzzle becomes less clear-cut.

This spider-web approach to puzzle and narrative design – essentially building the Butterfly Effect into the game – makes The Devil’s Men a vastly interesting adventure. Even in areas where Daedalic claim the puzzles are more simple and traditional, it appears solving one task in a specific manner will change the solution of another conundrum entirely. For the first time since The Walking Dead released, I’ve found myself excited about an adventure game not because of nostalgic love for point-and-clicks, but because the game dared to be ambitious.