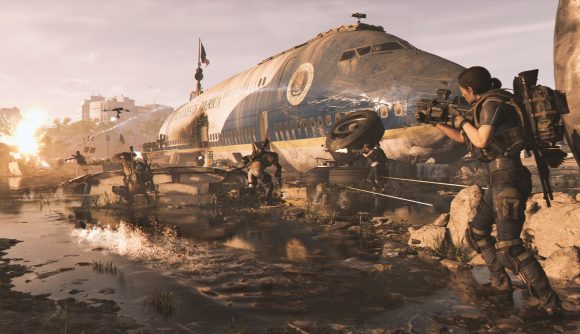 One of our favourite pre-release gaming pastimes is browsing ESRB ratings to see how silly the adult content sounds when listed for parental consumption. The Division 2, for example, is pretty much the blend of violence and profanity you’d expect from a modern shooter – except that this rundown makes it sound like a drug-fueled nightmare, too.

The Division 2’s proper ESRB rating is M for Mature, and content descriptors warn of blood, drug references, intense violence, and strong language. But things only get good in the more detailed online summary. In addition to in-game firefights “highlighted by realistic gunfire” you’ll see that “cutscenes depict instances of intense violence: characters shot in the head at close range; a restrained character struck repeatedly with a hammer (mostly off screen).” So yes, we can apparently look forward to the sort of ‘edgy’ torture scene we definitely didn’t get sick of after GTA5.

But it’s the drugs that provide the real fun, as you might expect. For example, you’ll find “drug labs” and “drug-making paraphernalia,” in addition to “the words ‘Drug Kitchen’ written on some walls.” I’d like to take a moment to admire the ingenuity of whatever drug makers are running around DC scrawling ‘Drug Kitchen’ on their workplace walls. Just in case you weren’t sure if you were in a standard kitchen or one that makes drugs, that easily removes all confusion.

The rating summary says the game is predominantly focused on “a fictional drug called Spice” – so presumably this is not the synonym for synthetic marijuana. This doesn’t rule out the possibility that this is the sort of sci-fi drug referenced in Star Wars or Dune, however. (Fingers crossed.)

The Division 2 release date is coming up fast, scheduled for March 15. Follow that link for much more info on what to expect from the post-apocalyptic follow-up.