Here’s the game: I say a colour, you say the corresponding videogame. Ready?

Burnt umber: correct! It’s Tom Clancy’s The Division. #FF0000 red: yep, it is indeed Hitman. Orange and teal: that’s right, every videogame released between 2011 and 2013. It’s with such colour-coding in mind (well, at least the former two examples) that Overclockers UK have launched a new range of gaming PCs whose visuals are inspired by particular titles.

Looking for a slightly cheaper hardware upgrade? Our best PC gaming headsets guide will set you on the right path.

Starting at £869.99 and extending up to £1899.98, the range comprises six machines, based on Tom Clancy’s The Division, Hitman, and Fallout 4. Each game has two PCs designed to deal with said title’s particular hardware requirements to different extents (available in “capable” and “absolutely mental” variants).

The cheapest machine, the Titan Contract (see what they did there) features an AMD FX 8370 CPU, AMD R9 380X 4GB graphics card and 8GB of RAM with 120GB SSD storage an 1TB HDD space. It’s all decked out in black, red and white, like a certain Agent 47’s go-to wardrobe choice.

At the other end of the spectrum, the priciest machine on offer is the Titan Vault, a Fallout 4-themed machine in jumpsuit blue and yellow… 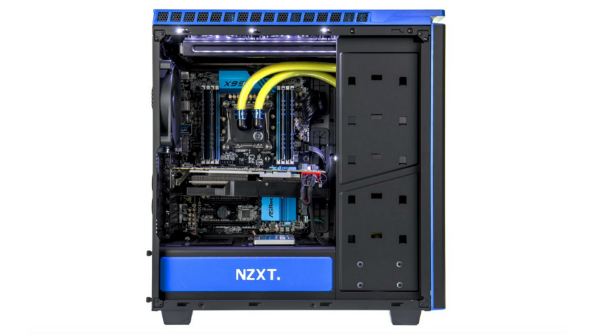 …featuring an Intel Core i7 5820K CPU, a GTX 980 ti graphics card and 16GB of RAM. That should tackle those random slowdowns in downtown Boston that seem to crop up, inexplicably and infuriatingly, on most machines.

All PCs come with a bundled copy of the game that inspired their specs and aesthetic, and are available now over at Overclockers UK.