There’s only one thing you want to know about The Division, and the answer is yes: the car doors do shut when you brush past them. Not only doors, but boot lids too.

There are other things that you should know about The Division though, such as the fact that it’s actually really rather good. A sprawling (almost) 1:1 recreation of Manhattan that’s suffering the fallout of a plague-like disaster is the playground for your actions, and it’s perhaps the best realised urban game environment ever built. It’s a world where co-op buddies come together to explore, loot, quest, and eventually restore order. And while it may be a city filled with Ubisoft Open World StuffTM, after having almost four hours of hands-on time with the game, I’ve discovered it’s a genuinely fun place to be.

The Division is just one highlight of the packed upcoming PC games 2016 schedule.

It’s probably best to clarify how The Division works. The seamless open world of New York is filled with quests focused on rebuilding the core infrastructure around medicine, technology, and security. The campaign has been designed so it can be satisfactorily played through solo for a more traditional single-player (albeit online) experience, but it’s clear the focus is on cooperative play with three other players. 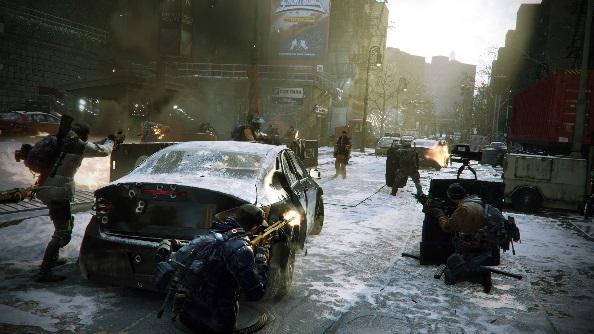 When in most areas of the world you’ll be in your group’s own private copy of the city and fighting against AI looters and gangs PvE-style. The confused marketing of The Division has made it seem that the game is an MMO filled with numerous players, but that’s not the case: when playing through the campaign missions and side-quests, The Division is simply a straight co-op game, akin to Borderlands, rather than World of Warcraft.

That’s reflected in mission design, too: unlike the bored and tired MMO staples of running to areas to kill a handful of enemies and bring back dropped items, you’ll be completing missions in familiar fashion to other big-budget open-world games, with cut-scenes, scripted events, and boss battles.

Side quests and collectables will keep you occupied during downtime from campaign quests, and while they’re still very much born from the Ubisoft template, developer Massive have thankfully found new moulds. There’s plenty of climbing in The Division (scaling echoey lift shafts being a personal favourite), but you won’t be heading up copy/paste towers. Instead expect to track GPS signals to find missing agents, collect intel from abandoned smartphones and laptops, and reactivate electrical junctions around the city. 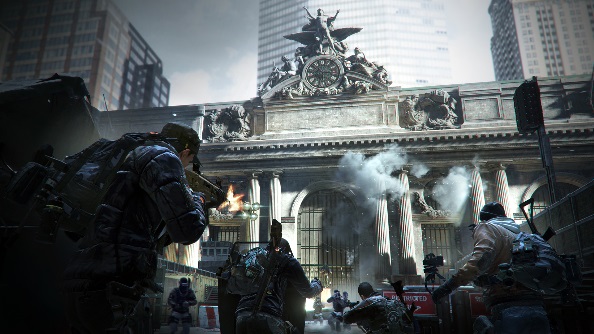 Should you be desperate for more human interaction, you can head to Safe Houses. If you’ve played Destiny on the consoles, these are essentially the Tower. There’s one in each district, and these buildings act as little hub areas for players to come together and replenish supplies. If you’re playing solo, these are the areas to meet up with potential co-op buddies.

Head towards the centre of Manhattan, where the infection is at its most dangerous, and you’ll enter the Dark Zone. Here the city’s ruffians are not your only worry: other players are in there with you. But it’s still not an MMO. Instead, The Division suddenly becomes a survival game.

While you can team up with other player groups to take on the mini-bosses and small objectives that are dotted around the Dark Zone, it’s when players go ‘rogue’ that things get interesting. And the game offers a lot of temptation to turn on other players. Every piece of loot in the Dark Zone is contaminated, and must be airlifted out to be cleaned before it can be equipped. Helicopters are summoned in with flare guns from extraction zones, but sending up a flare highlights your position to both other players and enemy AI. As the countdowner timer starts to slowly tick down it’s time to get defensive, because people are coming for that hazard-marked bag you’re carrying.

The tension in extractions is incredible, and they demonstrate the strongest areas of the game’s combat. Like other Tom Clancy games, working with tactics is required for the strongest results. It’s certainly not mandatory as in Rainbow Six, but combining your group’s skills with an inventive approach leads to quicker and more satisfying victories. 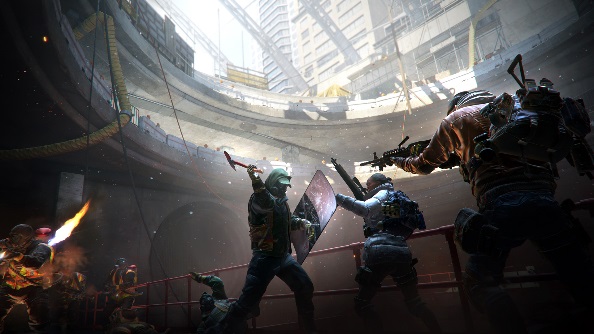 Such skills are numerous, and as your agent levels up they become increasingly crazy. In the starting hours of the game you could be using a riot shield that eats up any damage intended for you, or a bright orange radar pulse that tags enemies. 15 levels later, you can be deploying a seeker mine that rolls around like BB-8 before launching skyward and exploding over enemies, a flamer turret hell-bent on incinerating everything that moves, or a safe that crashes down by your buddies to offer instant healing and resurrections.

The skills are on cooldowns, which means there’s a bit of MMO flavour in each bite of the game. The Division is unashamedly an RPG, with a broad, branching skill tree that encourages experimenting with character builds and ability variations. Each of the core skills has three different modifications that can be unlocked, meaning there’s astonishing variation in the roles you can create for yourself. You’re never locked into anything either: you can acquire every skill in the game, and equip them to suit each situation. Your hotbar caters for three skills, so while you can’t be spamming abilities left, right, and centre, you can take in picks from each of the medic, tech, and security skill trees for a balanced approach.

The most surprising role-playing element however is that this is a Tom Clancy game with health bars, armour values, and damage points that jump out of enemies with every bullet that hits.

This means that, moment-to-moment, The Division feels nothing like a Tom Clancy game. You can’t headshot a guy and expect him to go down immediately. It feels jarring at first that a looter sprinting at you, firing his Glock at a 90 degree angle, can’t be decimated with a point-blank blast from a shotgun. To make matters worse the gunplay is pretty bland; there’s none of the rattling feedback that Rainbow Six has, feeling as if your agents are playing laser-tag rather than firing heavy rifles. It’s simply adequate, which is a shame considering the sheer amount of military hardware on offer. (In typical Clancy game fashion, it’s equipped with a selection of shooters that’ll make a NRA member sweaty under the collar). 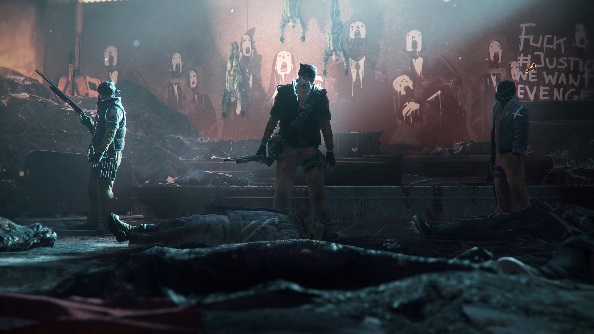 But after some getting used to, the damp gunplay never succeeds in ruining the experience. There’s excitement and tension in things like the Dark Zone extractions. Not only is the use of skills and tactics fun, but there’s an overriding joy in finding new loot: coats, hats, and more gun accessories than there are snowflakes falling from the New York sky. They may not be the flaming swords and jewel-encrusted shields of fantasy RPGs, but the need to collect is just as strong, and there’s even the colour-coding to notify what spoils are rarer and more interesting.

With the enemies held back, a chopper swoops in and you hook your yellow bag to a rope for extraction. Should you not get that far in life, enemy players can loot your corpse and take the spoils for their own. You either need to make it back to your death location before they do, or take your revenge when they try their own extraction.

Back outside the Dark Zone, attention turns back to helping humanity get back on its feet again. Just opposite Madison Square Garden is a base of operations made up of three wings, and each one can be improved by completing quests in medicine, technology, or security. They’re quests that take you deeper into Manhattan and its various buildings, which makes the world feel much more than just streets (and issue Assassin’s Creed has often suffered). These quests provide a currency that can be spent on the applicable wing, and the more you invest the more rewards and wing-specific abilities you can gain. 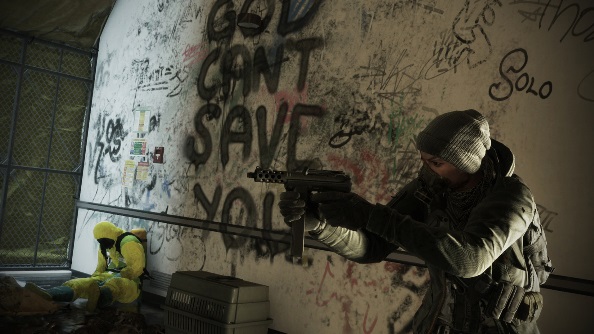 Not only that, as you develop the base, the environment is gradually cleaned up from a mess of collapsed bookcases and abandoned desks into an organised and smart HQ. It’s all in aid of making you feel like you’re having an impact on the world you’re saving: while the streets of NYC have to remain in chaos because of the multiple people prowling it who are various stages of the game narrative, your personal base can reflect your achievements.

The chaos is what makes those streets interesting though. There’s an atmosphere to The Division’s New York that I’ve not felt in an open-world game before. It feels truly authentic. Rats scurry along kerbsides, coughing pedestrians wander lost, and the beauty of the gentle snowfall and twinkling Christmas decorations are in stark contrast to the bagged corpses and flashing ‘MARTIAL LAW IN EFFECT’ signs.

It’s a world I want to get back to. Just days ago I assumed The Division was throwing millions of dollars into a concept that could never be realised. But after hours playing with its mechanics, exploring the depth of the RPG systems, and braving the hostility of the Dark Zone, I’m ready to go back to NYC and start cleaning up the streets proper.

If you’d like to tour the streets of contaminated Manhattan before the game launches in March, a The Division Closed Beta will be running 29th – 31st January.