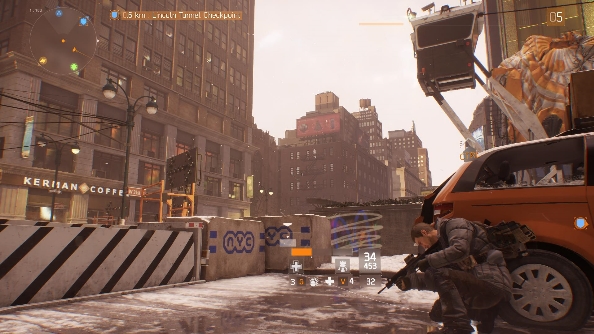 After years of waiting, Ubisoft’s co-op RPG The Division has bailed out and started its aggressive mission to dominate our free time. Visually the game is hugely ambitious, with massive indoor environments and colossal, near 1:1 scale city streets where every inch feels unique. If any game is going to push your hardware this year, The Division is it. So let’s take a look at how the game performs on PC.

First up: Ubisoft would be pretty disgusted if they caught us calling the game a port. Developer Massive insist on labelling it the PC ‘version’ since it’s been built with our platform in mind as well as the consoles. That tale rings true in the menus where, compared to Ubisoft’s Far Cry Primal, the options are far more detailed and extensive.

You’ll find 25 individual elements to tweak, from the standard anisotropic filtering and shadow quality, to more granular details such as wind-affected snow, parallax mapping, and sub-surface scattering. If these words are all alien language to you, the menu helpfully explains what each option does when you hover your mouse over them, allowing you to make informed choices when switching elements on and off. 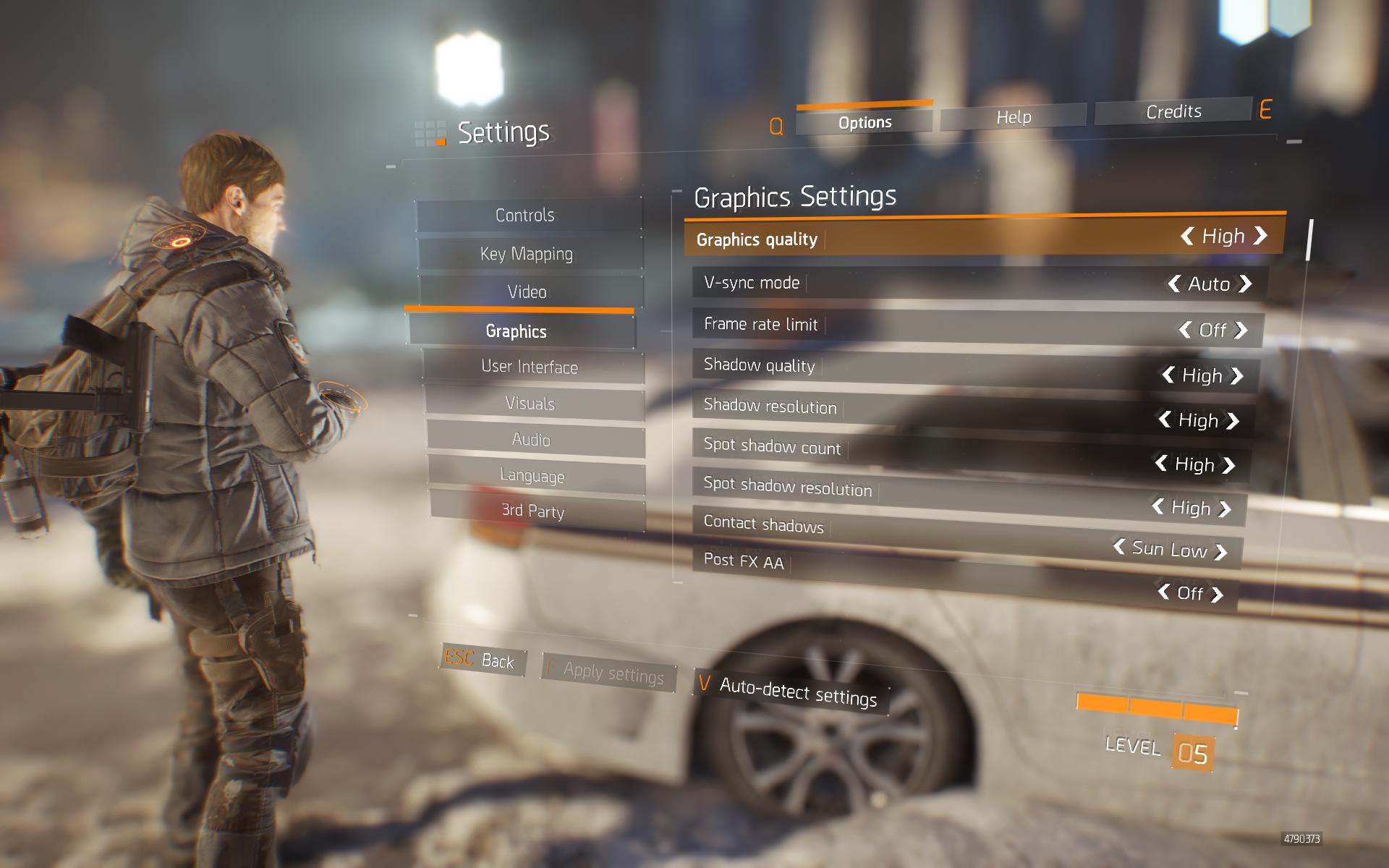 Beyond the standard graphics menu is another collection of settings – ‘visuals’ – which allow you to turn various elements of the HUD on and off, as well as toggle a colorblind mode. If you find the RPG aspects of the game are ruining your enjoyment of the gritty setting, turning off damage numbers can help restore a more classic Tom Clancy vibe.

On top of that, the ‘User Interface’ tab of the menu allows you to reposition every element of the HUD. The Division has an astonishingly busy UI thanks to its combination of cover shooter and RPG mechanics, and its obvious that Massive realise that this wont be to everyone’s taste.

A full key re-mapping menu is also available. The only notable missing element is a field of view slider, but since The Division is third-person this isn’t a real deal breaker.

Provided you’re running a system similar to mine, The Division will default to the ‘high’ graphics pre-set. At this level the game looks truly gorgeous, with significant levels of detail in every object. All settings are turned on (albeit not cranked up to maximum), so you get to see the full range of tech at play. This includes dynamic snow that drifts on wind currents, and the dynamic range effects that give The Division its filmic look.

Let’s look at the full range of settings and see the differences between each. 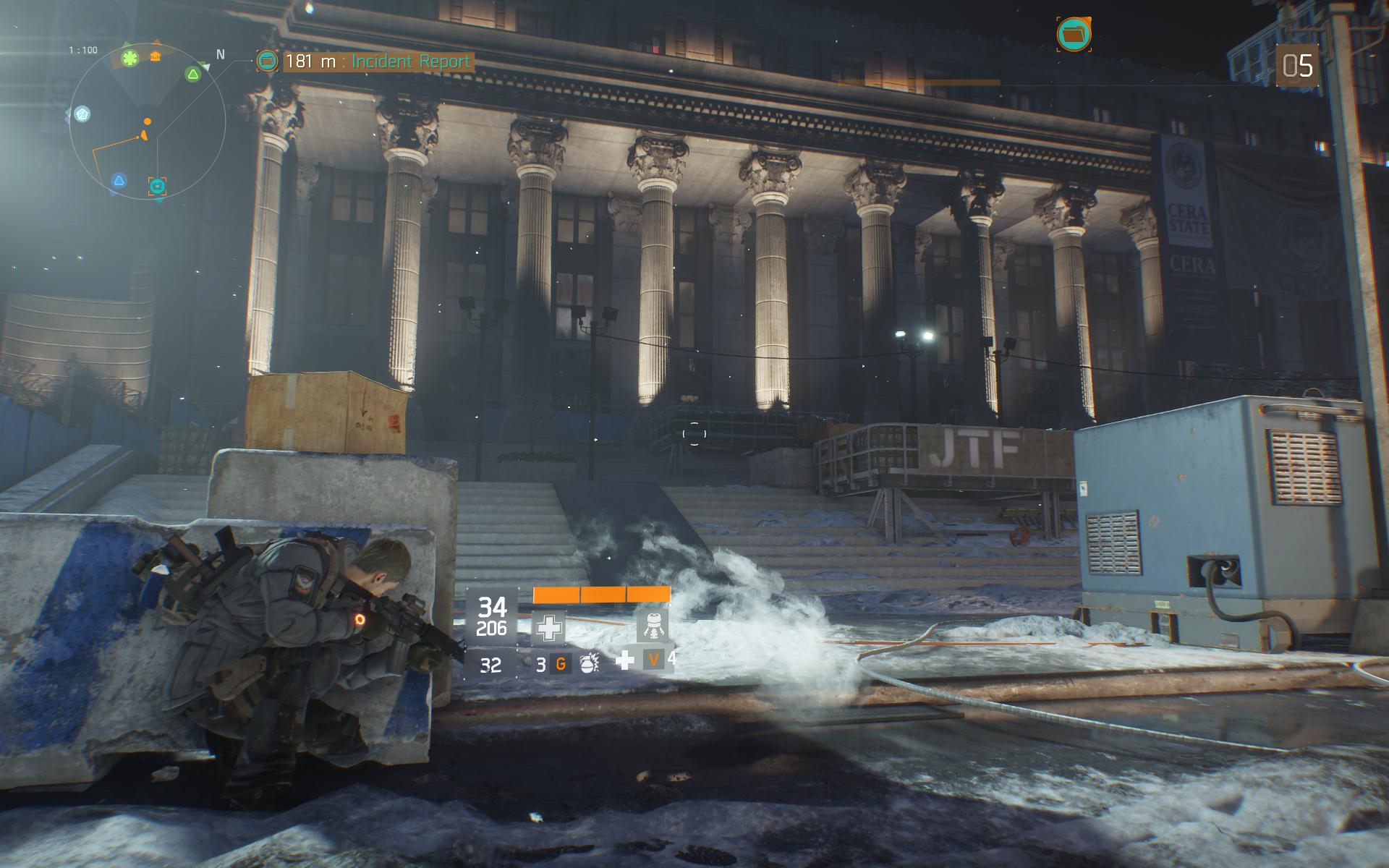 ‘Ultra’ settings push the boundaries, vastly increasing the draw distance of the city, while maximising the amount of detail on display. On the whole it’s not a massive leap over ‘high’, but for the graphical connoisseur those improved reflections are likely a must-have. On my mid-powered rig ‘ultra’ brings framerates down to the mid-30s, which while perfectly playable, is a notably more sluggish experience than the ‘high’ setting. 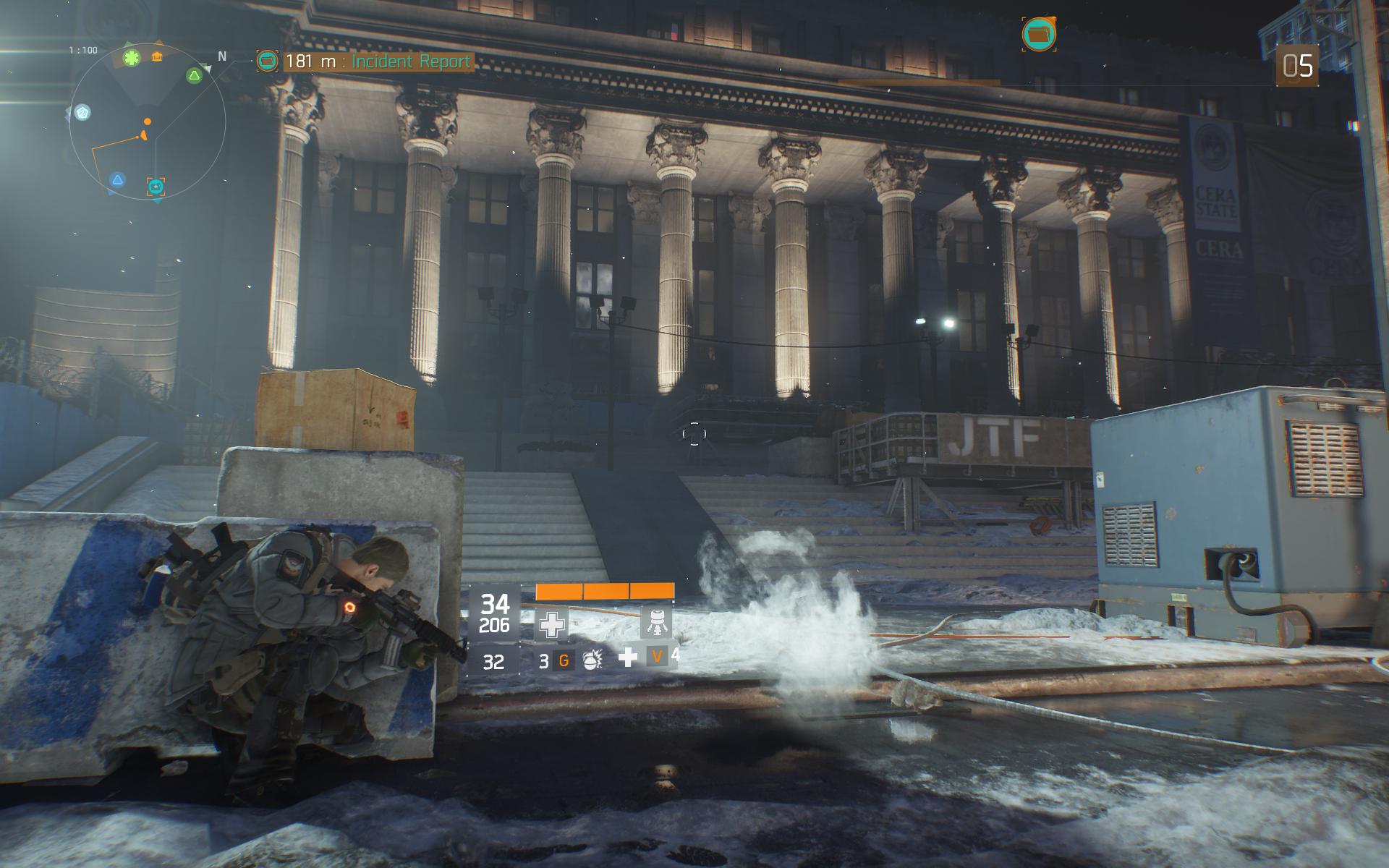 When played at ‘high’ settings gameplay is always smooth, but there’s notable framerate fluctuations depending on where you are in the world and what’s going on. Indoors, where the world isn’t constantly being streamed and rendered, 60fps is easily attainable and remains a constant. Outdoors, expect something around the mid-40s to low-50s. That’s provided the weather is fine and dry; when dense snow or thick fog makes an appearance things dip into the low-40s. It’s never enough to cause stutter or slowdown, thankfully. 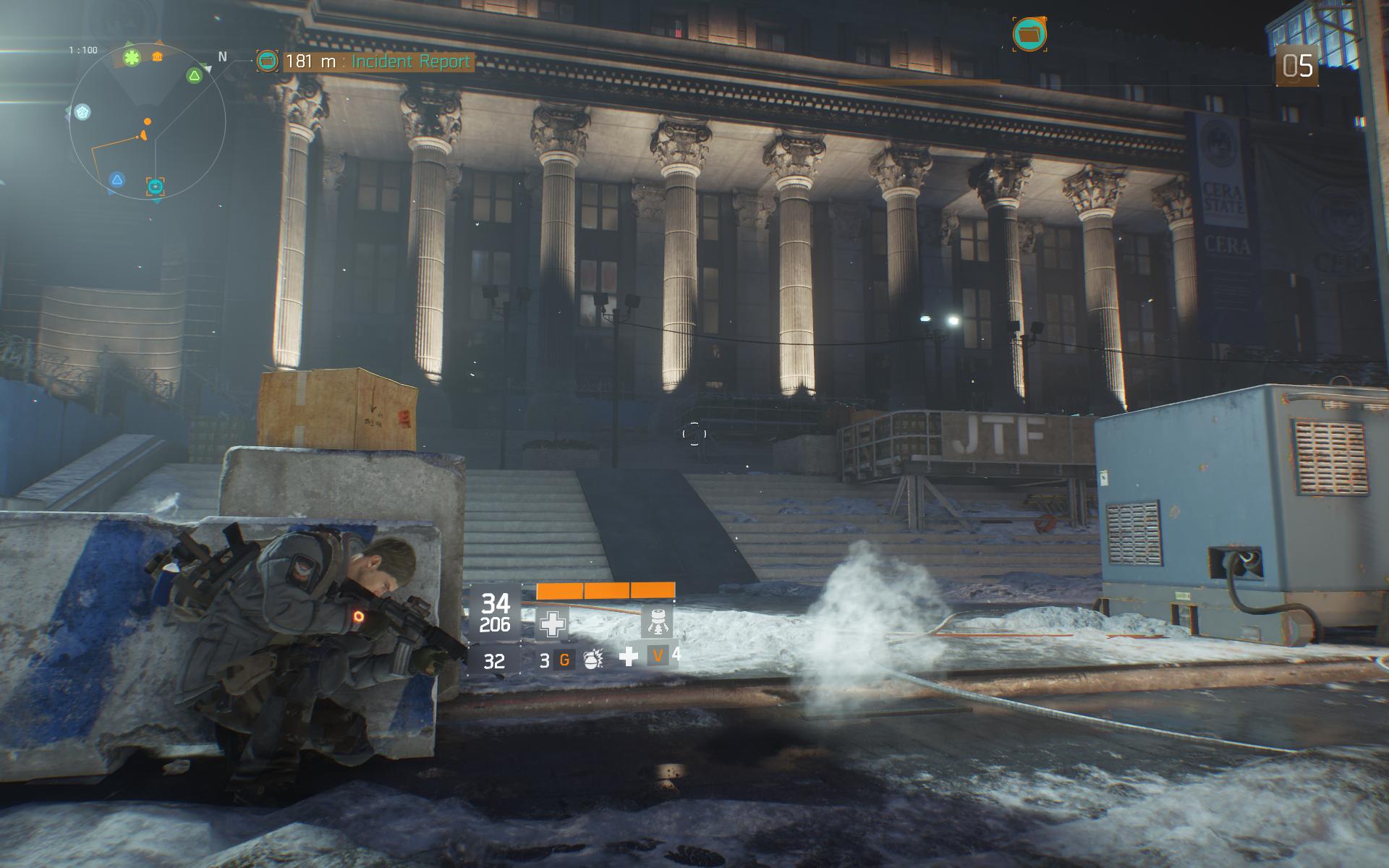 Making the jump to ‘medium’ turns more settings on, with options dialed to ‘medium’ or ‘high’, creating a combination that easily offers a fairly constant 50fps. Heavy snow will still impact that, but since the snow is not wind-affected at ‘medium’ settings it’s not quite the tax on your system. Shadows are a little less complex, but the lighting remains great. ‘Medium’ settings still keeps depth of field and lens flare turned on, and these go a long way to keep the fidelity of the image much closer to what you’d expect The Division to be. 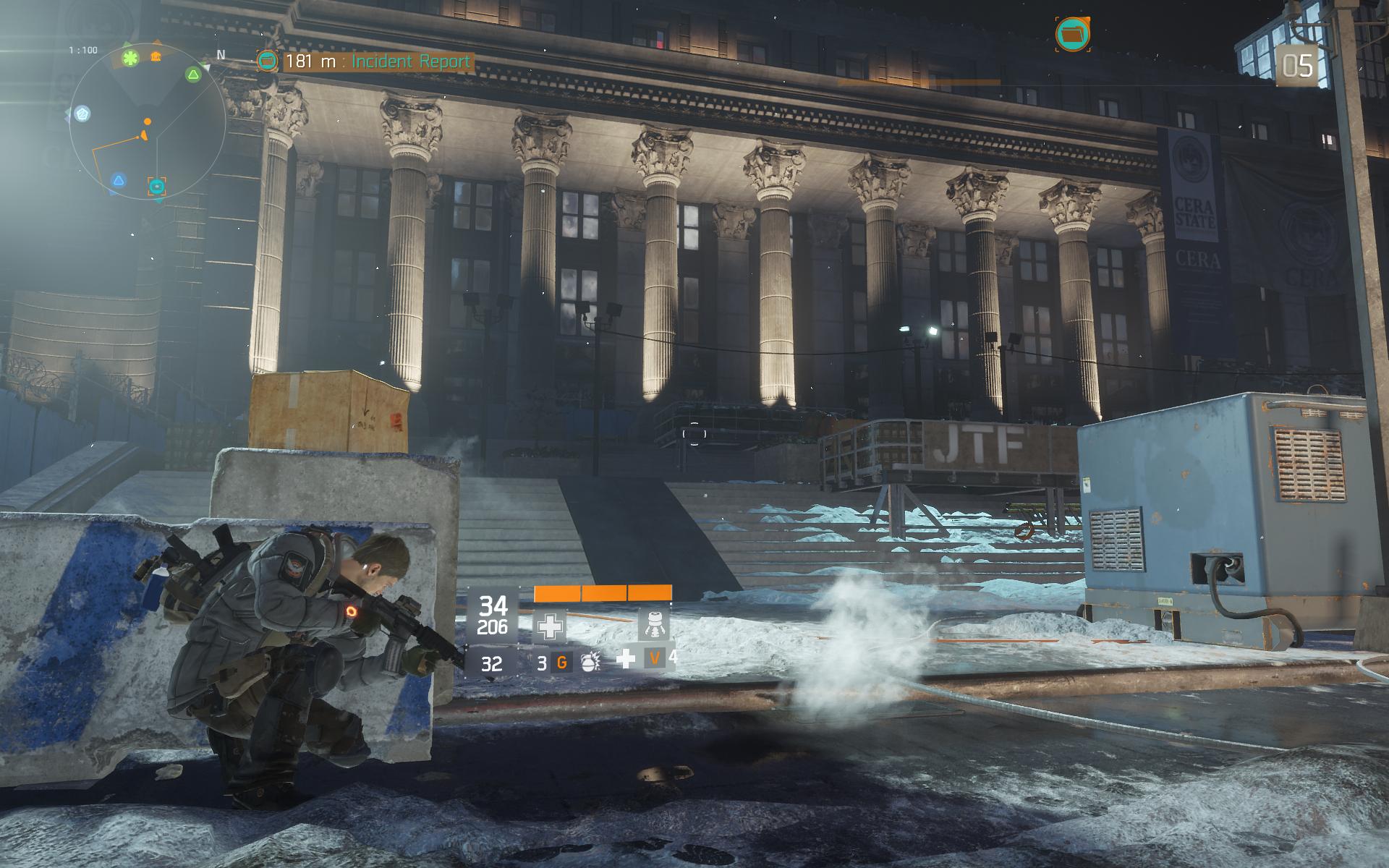 If your rig isn’t quite powerful enough to run the higher settings, The Division cuts back on much of its tech to offer a ‘low’ pre-set. It’s very obviously stripped down, with effects like chromatic aberration and lense flare turned off. Their absence means the image looks a lot more ‘gamey’ than the filmic feel provided by the higher pre-sets, although the lack of depth of field effects means, amusingly, that some elements look sharper on low than they do at ultra. Fog and smoke effects look flat and misty due to lacking volume, and the lighting is notably flatter and colder. In exchange for these cuts though, framerates stay solidly between 70 and 80fps, regardless of your location.

It’s clear that a lot of work has gone into The Division to make sure it looks especially brilliant on PC. The city is certainly the most realistic urban sprawl that you can explore today (unless you were planning on going outside), and thankfully the many, many options available to play with means you can adjust settings to find the optimal balance for your rig.