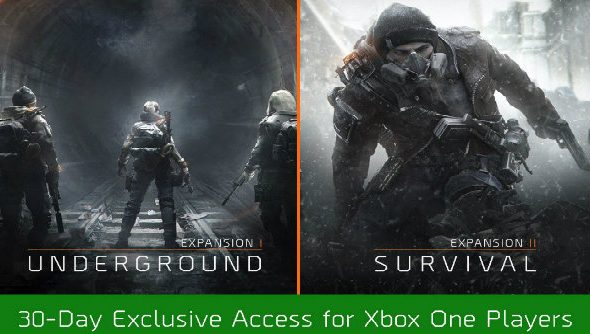 It seems a bit strange to wait until the day before launch to announce something like this, but the first two of The Division’s paid DLC packs – Underground and Survival – will have a 30-day exclusivity period on Xbox One.

The Division might be out tomorrow, but there’s plenty more to come in our list of upcoming PC games.

Starting from the already announced launch dates for The Division’s first two DLCpacks, PC players will have to wait 30 days for them to be available, because Xbox One players will be getting their filthy console-playing mitts all over New York’s tunnel network first.

Why Ubisoft waited until now to reveal this information I don’t know. You’d think it would be announced a bit more in advance – you know, so players who wanted to opt in for early DLC access could’ve pre-ordered the Xbox One version.

I honestly don’t mind waiting an extra while for some DLC – at least we’ll know if it’s good or not by the time we get hold of it – but it would have been nice for people to make an informed buying decision.

If you’re looking for more info on The Division ahead of tomorrow’s launch, data miners have picked through the game’s files and uncovered mission count, weapons and other spoilerific secrets.