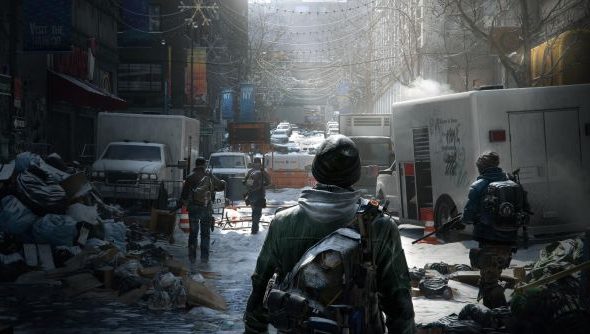 After a few months of general information overload about The Division, we’re starting to get the skinny on how the PC version will be defined. Today we’ve got creative director Magnus Jansén talking about how PC players will be able to communicate via text chat in addition to the voice systems on console. It’s a standard thing, but its inclusion is part of the wider, fairly complex social systems that are built into the game.

There’s a lot of great games coming out this year. Here’s thebest of 2016 on PC.

At its core, the PC-specific communication system is the MMO chat pane you’ll be used to from World of Warcraft or your particular F2P/subscription poison. But it’s only available in these safe house zones within hub areas. Jansén explains:

“[The safe house is] also a social space where you can easily use your proximity voice, or on PC chat because on PC you obviously have a chat for group or local. [It’s a] classic MMO chat system which you can use to hook up with strangers.”

The plan is for this to help with communication on PC, make groups easier to get and build a stronger community. You’ll also have access to that proximity voice chat, if you’ve got a mic. Meanwhile, this won’t be usable elsewhere – in the Dark Zones, for example, there’s less ability to talk to folks you haven’t met yet. Plus, they’re large areas without too many other people in them, Massive want each encounter in these PvP bits to mean something.

If you want to read more on The Division, Matt wrote up why he thinks it’s going to be agreat PC RPG.