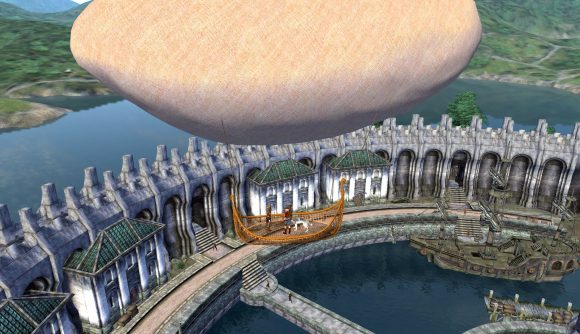 The Elder Scrolls IV: Oblivion might be 15 years old, but the beloved RPG’s modding scene is still going strong. While many mods are focussed on adding minor aesthetic and gameplay-related tweaks to the game, a recent community creation gives you the opportunity to explore Cyrodiil in a whole new way – that is, by airship.

‘Airboat’ might be the better description for Chambcra’s new Oblivion mod. The contraption sees a basket in the shape of a Viking-style vessel (with curled edges somewhat reminiscent of the famous Oseberg ship) hoisted into the air by a huge fibrous balloon. Sure, it might look a wee bit out of place in Cyrodiil’s normally non-aircraft filled skies, but it seems like a wonderful way to take in all the magnificent views.

The way it works is by using a summoning spell to, well, summon it, and you simply ‘activate’ it to hop on in. You can then control its direction, height, and speed (there are seven different options for the latter) using designated keys. Best of all, you can get stuck into ranged and spell-based combat while floating above Tamriel – you’ll just need to make sure the airship is stopped at the time.

The ship itself also boasts a “powerful destruct spell with a 30-foot radius that casts straight down”, which you can use while moving, to fend off foes that have spotted you and want to take you out from the ground below. Additionally, you bring your companion and a second follower aboard if you so wish. Lovely stuff.

If you’re keen to check out the mod for yourself, you can find it at Nexus Mods at that link. As ever, be sure to check out the modder’s instructions to get it running smoothly, and mod with caution! If you’re after some community creations for its even-more-iconic sequel, Skyrim, we’ve got a rundown of the best Skyrim mods, too.