When Elder Scrolls: Legends released in full this March, it bore two notable absences: personality and nods to Skyrim, the most successful and well-known entry in the franchise. The new Heroes of Skyrim expansion solves both of those problems.

It does this without sacrificing any of the depth or interplay of systems that’s sustained the CCG’s community in those tricky post-release months – when players are trying to suss out whether it’s a game worth investing serious time and money in. It’s also a loving tribute to the characters and locales of Skyrim, so effective in that regard that I ended up buying Skyrim (again) after just a few hours with the new cards.

So what’s new? Dragon-type cards are, understandably, the focus of this 154-card expansion. There are dragons for every type of deck, from Strength and Endurance, to Intelligence and Willpower – whatever deck you’re building, you’ll be able to add at least a couple of dragons to it. Dragons are joined by Shouts and Beast Form cards. The former functions in much the same way as Shouts in Skyrim, while the latter transforms applicable cards into buffed werewolves whenever you manage to destroy an opponent’s rune. Bulking out the remainder of the expansion are a number of famous faces and places from the game like Barbas, Skyforge, J’zargo, and Thalmor Embassy, not to mention an array of creatures who supplement the new keywords with additional buffs if you manage to play them at the right moment. 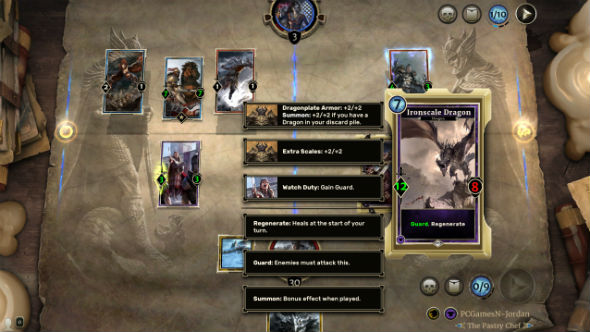 Dragons are the headliners of the Heroes of Skyrim expansion – they’re plentiful, powerful, and capable of devastating synergies both when played alongside other dragons and other supporting cards. As you might expect, the new Dragon-type cards are reserved for mid- to late-game plays, with the first three dragons available at four Magicka, Karthspire Scourge available at five Magicka, and the majority of the remainder costing between six and eight Magicka. Paarthurnax and Alduin are the outliers, costing 12 and 20 Magicka respectively.

The majority of Dragon-type cards also possess a distinct ability in addition to an ability, making the 17-strong race one of the most powerful in the game. For example, the 4-cost Serpentine Stalker not only gains two power for every creature it slays, it’s able to move to another lane in order to attack, leading to some massive advantages provided you can buff it with items and keep it safe. Likewise, Echo of Akatosh gives every creature in your deck a random keyword upon being summoned, providing a welcome and immediate buff to even your most basic cards, and dramatically diversifying your options going forward. 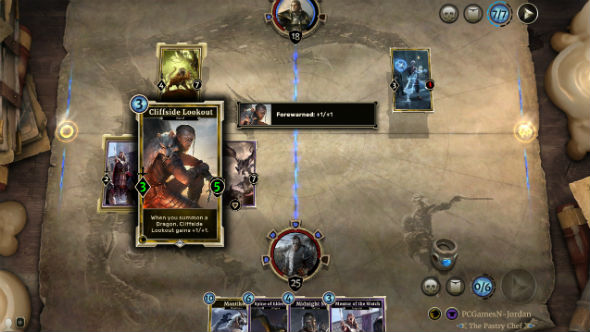 Those cards with Lookout in their title all provide a bonus when a Dragon is summoned, making them perfect cards to place on the board a couple of turns before summoning any dragons. The 4/2 (Power/Health) Ghost Sea Lookout gains a ward (protecting from a single attack of any power) when you summon a Dragon, suddenly making it a very tricky card for your opponent to remove from the board. A couple of Ancient Lookouts allows you to get a 1/1 Draugr with Guard in each lane from a single Dragon summon, effectively ensuring not only the Dragon’s safety for another turn, but also the Ancient Lookouts that spawned the Guard cards, which lets you make a similar play the next turn. Without these synergies these cards would be nothing for your opponent to worry about, but the fact that all it takes is a single low-power Dragon summon to reverse your fortunes makes them essential supplements to a Dragon-based deck.

Midnight Snack is a massively underrated card for Dragon-type decks. It’s a 2-cost Guard card that offers a 1-cost reduction to a random Dragon in your hand upon death, which makes it much easier to play powerful Dragon cards early into a game. Innkeeper Delphine is another must-have card for anyone looking to build a Dragon-type deck – she transforms into Grandmaster Delphine, a 5/5 card that’s immune to attacks from dragon, an incredible return for a 3-cost card.

I’ve built three decks around Dragon cards so far, and while they all require perfecting, the synergies between the Dragon-type cards are easy to spot and highly potent, making for incredibly satisfying plays when you’re able to chain all the effects together. Watching both of your lanes light up with buffs and newly spawned cards because of a single Dragon summon is enough to put a smile on even the most jaded of free-to-play collectible card gamers. 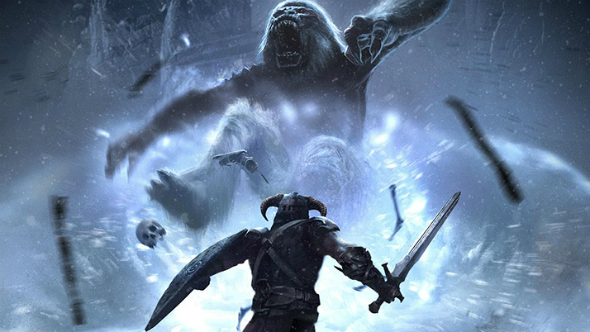 Shouts fit seamlessly into Elder Scrolls: Legends’ gameplay. Just like in Skyrim, Shout cards have three levels of effectiveness. For example, the first time you use Call of Valor you’ll summon a 3/3 Sovngarde Hero, use another one and you’ll summon two Sovngarde Heroes, use it a third time and you can fill a lane with the ghostly Nords. Unrelenting Force is a personal favourite, letting you unsummon a 3-power foe in its first use, which also rids them of any buffs your opponent might have given them. If you can upgrade Unrelenting Force to its third level then it’s a bona fide life-saver – just as it is in Skyrim – letting you unsummon every enemy creature in a lane. It’s an unbelievably cheeky move that not only gives some of your creatures a free attack, but also robs every enemy creature of their buffs and resets any card transformations they’ve undergone.

Skyrim lore comes into full effect when playing a Shout-based deck. You won’t want to rely on your deck spitting out Shout cards in order to get an advantage over your opponent. So, fortunately, you can draw Shouts from your deck by playing cards like Greybeard Mentor, or directly upgrade a Shout in your hand by playing a 0/4 Word Wall card with Guard. A couple of Dragon cards also synergise well with a Shout deck: Dovah of the Voice plonks a random Shout card into your hand upon dying, whereas Paarthurnax will draw three random Shout cards into your hand upon being summoned, while reducing their costs to nothing.

Shout cards also benefit from falling under the Action category of cards, which means they can be played straight from your hand, making them incredibly difficult to defend against. To counteract that, they also suffer from an inability to deal direct damage to your opponent and their creatures, save for Fire Breath, which can deal ten damage to a single enemy creature in its fully upgraded form. Therefore, it’s generally advised to slot a couple of choice shouts with three copies of each into a deck with a separate focus, not forgetting to bring a couple of Greybeards and the odd Word Wall with you to boost your chances of drawing Shout cards. 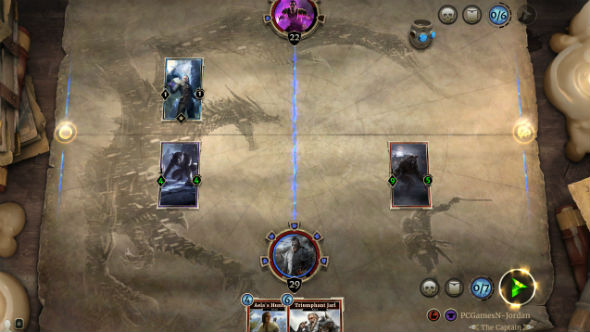 Tapping into one of the more memorable quest lines in Skyrim, Beast Form cards transform into Werewolves when you destroy one of your opponent’s runes. Leading this humble pack of six cards is Aela the Huntress, who I remember marrying back in 2011 with all the clarity of a Vegas flashback. On first impression, it’s a poor card, costing seven Magicka for a paltry 3/3 Power and Health. However, its summon and Beast Form effects make up for it, letting you deal one damage to the creature of your choice upon being summoned, and then instantly destroying any wounded creature when Beast Form is activated – ideal for getting rid of powerful cards or formidable Guards. Beast Form also lends Aela the huntress a +2/+2 boost, making this a devastating, albeit situational card.

The other five Beast Form cards gain similar buffs upon being transformed into Werewolves, although a couple standout in particular thanks to their synergies and keywords: Harbinger Companion gives friendly Werewolves +1/+1; Grim Shield-Brother gains +1/+1 and Drain; and Whiterun Protector gets Guard, Regenerate, and a whopping +2/+2. Despite the relatively small number of cards that possess the Beast Form attribute, the deck I built around this attribute has been one of the most satisfying and effective all-round decks I’ve used in the game. Add item buffs like Maple Shield, Horned Helmet, and Daedric Dagger and you can make your Werewolves nearly indestructible. 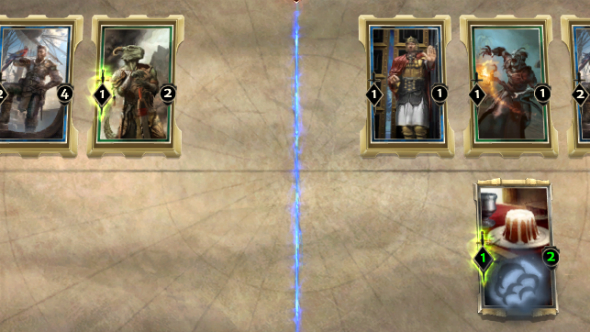 These new card races and attributes add even more depth to deck building, but they’re only half of what the Heroes of Skyrim expansion brings to the board – well over 100 of the new cards owe no allegiance to Beast Form, Dragon, or Shout-based decks. What they do offer is unpredictability, personality, and the potential for bonkers plays. Chief among them is Grisly Gourmet, which comes with the handy summon ability of being able to turn any enemy creature with two power or less into a Sweet Roll, which heals any creature that attacks it. After working this card into all of my decks I stumbled across a massive drawback – your opponent can give the Sweet Roll weapons and armour. Fighting a weaponised pastry is one thing, fighting a pastry with Lethal (an effect that kills any creature regardless of their health) is insult to injury, especially when you lose a newly summoned 10/10 Frost Giant in the process.

Barbas is another memorable addition to The Elder Scrolls: Legends. The curious canine offers one of three potential summon effects: gain +1/+1 and Guard; put a random Daedra into your hand; or gain Charge, which lets you attack on the same turn the card is placed. Barbas comes complete with the same ridiculous Donald Duck-esque voice from Skyrim, and the fact that it can fetch powerful cards like Iron Atronach and Dremora Markynaz into your hand out of nowhere is hard to resist. High Hrothgar, meanwhile, is an ongoing Support card that raises the Power of any summons in line with their Health. Ordinarily, that’s not a significant buff, but with cards like Portcullis (a 0/9 card with Guard) the benefits are whopping. Of course, these effects aren’t easily or reliably replicated, but when you are able to chain cards together you’ll do well to stifle the inevitable wave of giddiness that ensues when you deal a finishing blow with an inanimate object.

These cards help add an element of unpredictability to The Elder Scrolls: Legends, without treading into RNG territory with luck-based decks and single draws that can reverse an entire match. Even a 9/9 Portcullis or a Lethal, dagger-wielding pastry can easily be squashed by an Action card of Summon effect. Dire Wolf Digital’s original glut of cards were functional and a little dull, but they lent themselves to complex synergies and well-rounded decks. While a good chunk of the new additions add more of the same in terms of solid card pairings, the bulk of the new Heroes of Skyrim cards fills the void of personality and flavour that’s held this mechanically flawless CCG back.

What do you make of the new cards? Let us know in the comments below.