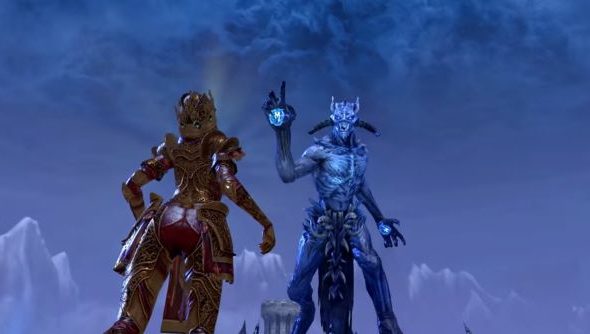 Update Jun 14, 2016: Bethesda have clarified several elements of One Tamriel.

In a big blog post, Besthesda have explained exactly how One Tamriel will work. They’ve also revealed that their 7 million player figure is the number of people who have created accounts and played the game since launch – not counting free trials or beta players.

Explore our front page with no level restriction for morePC gaming news.

Here’s exactly how One Tamriel works:

All this information was posted by Matt Firor on the official TESO blog, making sure that all the information got across despite the short time given in the press conference.

Original story Jun 13, 2016:The Elder Scrolls Online is getting upgraded once again. After launching to lacklustre reception and mild unpopularity, it’s been improved and worked upon by a dedicated team over many years. The next is taking a big step – the whole world will now be explorable at any level. This means that not only can you play with anyone you like, but after a short tutorial experience, you can go wherever you want.

A similar system is coming to the next WoW expansion, but on a much smaller scale and in a more awkward way. This is exactly the sort of freedom that fans of previous Elder Scrolls games expect, and that lack of similarity between the namesakes has proved problematic in the past.

The announcement came partnered with a celebration video of the previous updates for the game, seen below.

When exactly One Tamriel will be launching hasn’t been announced though it should be coming soon, as The Dark Brotherhood, has now launched on all platforms. You can see a few more details in theofficial stream archive.