The Elder Scrolls Online’s new DLC, Waking Flame, brings two new four-player, three-boss dungeons to tackle: The Dread Cellar and Red Petal Bastion. The latter’s all about a bunch of tomb raiders called the Knights of the Silver Rose, who once protected Tamriel from Daedric threats but have since strayed from their righteous path. They’ve been pillaging the precious relics of nearby temples and piling them high in the bowels of their stronghold. The problem is, those artefacts have been seeping some Daedric nastiness into the place, and the warriors of Red Petal Bastion have become consumed with corruption. Well, it happens.

It’s this band of glorified treasure hoarders that I got to battle in a demo session with lead encounter designer Mike Finnigan, creative director Rich Lambert, and dungeon team product owner Shane Slama ahead of the DLC’s launch. But one heck of a surprise lay in wait: a boss so imbued with Daedric mischief he turned my crew and I into sweet roll-scarfing goats.

The dungeon starts much as you’d expect. A wronged artefact owner wants his goodies back and the slightly scary Dremora ‘Foolkiller’ Lyranth will help, but only if she gets to keep one very specific relic. We battle early waves of enemies, like Silver Rose archers, warriors, and pyromancers, in the courtyards outside, one of whom is tormenting a poor doggo by hogging a roast chicken leg. So, in the words of Finnigan, she “deserve[d] all the death for that”. Quite right. We pound her and her booty-burgling kind into the ground – y’know, for the oppressed mutts of Tamriel.

We also encounter a monstrous fellow called a Silver Rose Realmshaper bedecked in tribal tattoos, which are the cosmetic prize for beating the dungeon on veteran difficulty – a tough ask, as it gives each of the three bosses their own hard mode. 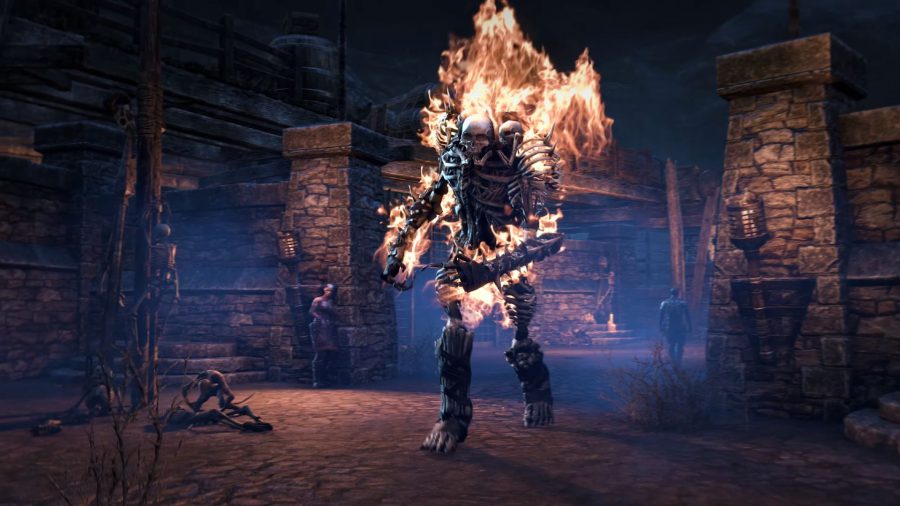 The dungeon doesn’t take long to get to the good stuff, as it’s the first boss battle that slaps the biggest grin on my face. In a courtyard we spot Rogerain the Sly who, like the dungeon’s other bosses, has started using those pilfered relics in creative ways. Finnigan teases this to me, wondering if I’ll work out which Daedric prince’s artefacts this guy’s using. I get it pretty quickly.

As the fight gets going, ol’ Rogerain starts dishing out blistering area-of-effect attacks and manic, mischievous chatter in earnest. I’m in the heat of the scrimmage, chucking my Nord Dragonknight’s berserker strikes and lava whips at him up close, and don’t spot what Finnigan calls the “awesome moment” until he flags it, jubilantly – “He turned somebody into a goat!” – and bursts into laughter. I do, too: one of my formerly fearsome crewmates is whizzing around the stony yard as a wee white billy-goat – and it’s just utterly, delightfully bizarre.

When this happens, the ‘chosen one’ – what else could I call them? – of the group is given a single, apparently crucial, mission: ‘Gobble up those scrumptious sweet rolls!’ (all those stolen ones from Skyrim, I presume). When my time comes, I see those delicious, icing-topped treats littering the square, and tear around the yard, flitting between the golden-hued pastries as fast as I can, single-minded in my pursuit of Rogerain’s downfall and one hell of a stomach ache. 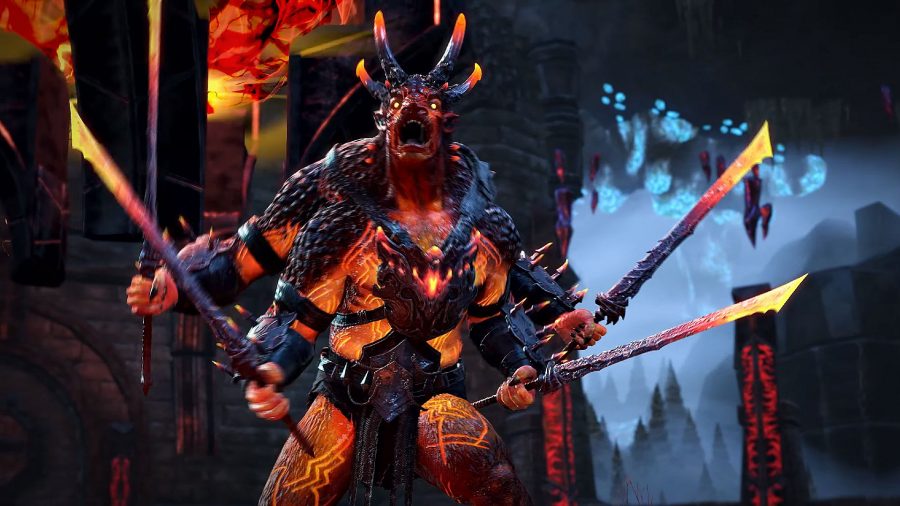 It doesn’t last long – probably around ten seconds per person – but it’s enough to make the boss encounter a totally new, joyful experience. You even get a little goaty jump to try out, which has brand-new sound effects, just to really milk the experience. It’s unlike anything I’ve seen in a TESO raid before.

There’s nothing like gorging your weeny, hoofed hero on Tamriel’s tastiest treats while watching your poor teammates towering over you, flinging their magic and might at a raging boss. Because, to be clear, the (super tough) show does go on; your team just has to battle Rogerain with one fighter – ahem, goat – down.

Unsurprisingly, this whole shebang was inspired by the Daedric prince of madness, Sheogorath (TES IV fans and TESO mages might remember him from his own slice of Oblivion, the Shivering Isles, and as the chief antagonist of the Mages’ Guild questline). I ask about the inspiration for this encounter as we take turns to get our G.O.A.T. routine on, and Finnigan tells me it pretty much stems from a single question: “What would Sheogorath do?” The Daedric mischief maker is known for these kinds of transformative shenanigans across the series, and it works brilliantly as a new dungeon combat mechanic. 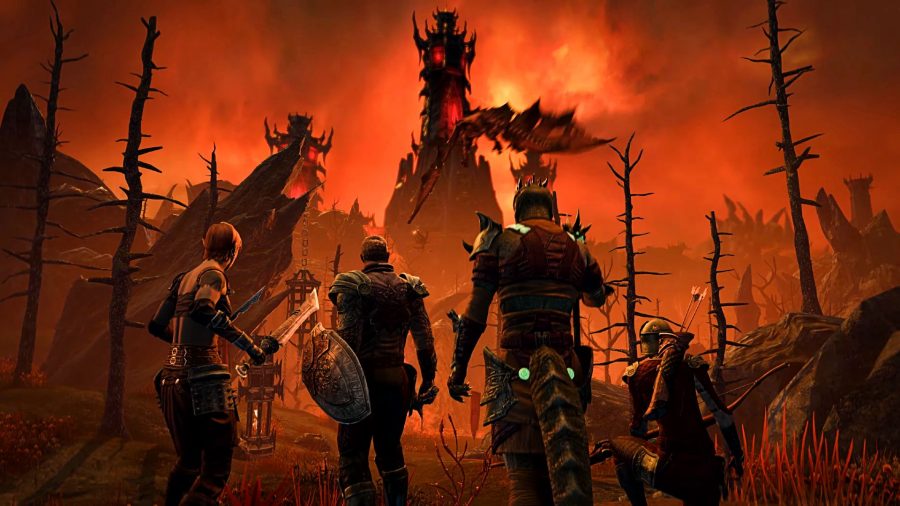 It turns out this was tough for the TESO team to execute, too. Lambert tells me that the devs went through multiple iterations of the “goat boss” mechanics, like “how you turn, your hotbar changes; you lose your abilities”, noting that what’ll end up in players’ hands feels very different from how it started. Finnigan adds that a technical hurdle in creating this battle is that TESO’s monsters don’t typically move sideways or jump, so implementing these features meant a visit to TESO’s animation team to bring the humble goat to life. “There was a lot of blood, sweat, and tears on the goat fight,” Finnigan adds. “And sweet rolls.”

The two remaining boss fights are much more in the vein you’d expect of TESO’s dungeon content, with plenty of new tricks up the bosses’ sleeves waiting to deal death at you. Eliam Merick and Prior Thierric Sarazen can whip out some devastating stomping attacks, AoE effects, and a few surprises courtesy of their Daedric trinkets.

One that nearly finished me off was Sarazen’s conjuring of magical doppelgängers, who then rotate around the room like furious, death-dishing pinballs. Merick also gets some buddy backup mid-fight, which you’ll have to strategically decide to take out or just keep dodging. As per usual, you’ll see some of these mechanics signposted in the earlier fights, with the big bad boss Sarazen prepped to throw everything plus the kitchen sink at your band of four. 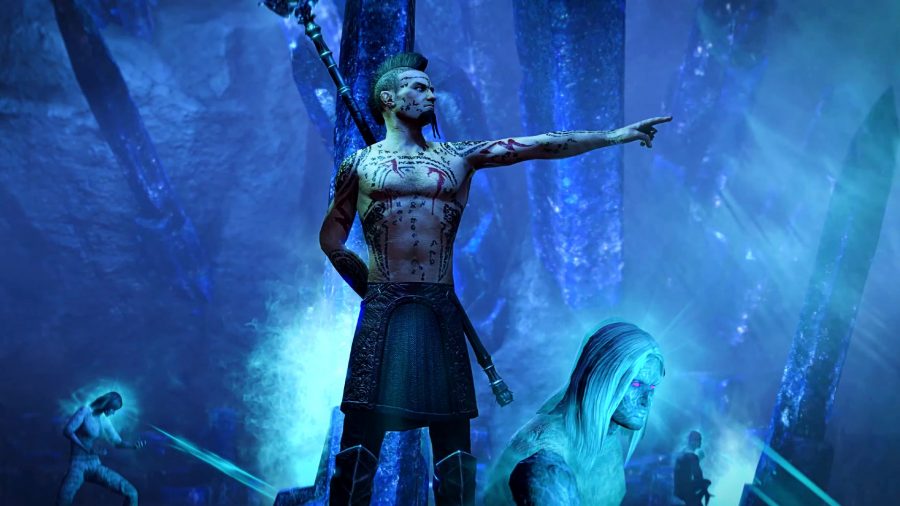 While I’m told Red Petal Bastion will help set up some of the story to come in the next stage of TESO’s Gates of Oblivion chapter, it’s more than worth a whirl for the zesty – and hilarious – new mechanics it offers alone.

It strikes just the right balance between tough and entertaining, and if The Dread Cellar also measures up, Waking Flame looks to be a solid expansion to tide fans over until the adventure’s big finish arrives with Deadlands later this year. Plus, there are plenty of secrets to uncover, as I’m teased with a lot of hint-laden comments on my surroundings. But who has the time to go plundering when there are hoofs to get used to and sweet rolls to munch down?

The Red Petal Bastion dungeon is set to release today as part of the Waking Flame DLC. For more like this you can check out our list of the best MMOs on PC, or our roundup of free MMOs.