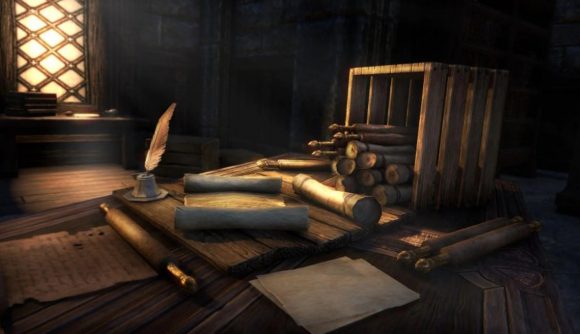 Soon you won’t need to cough up any real world cash for Elder Scrolls Online‘s version of loot boxes. The MMORPG game is going to let you earn Crown Crate goods without ever having to think about your actual wallet.

For Update 30, the Endeavours system is being implemented. This will be a daily-to-weekly remit of optional sidequests, involving missions like killing enemies using specific equipment, or crafting certain items, that provide some of the usual rewards, like gold, and Seals of Endeavour, a new currency. From then on, you can exchange Seals of Endeavour for anything Crown Crate-related. This can range from consumables like XP scrolls and potions, to rare mounts or pets, all on a rotating availability.

Your Seals are perpetual and stack, meaning that once you have them they’re yours until you need to use them, handy if there’s nothing on offer that takes your fancy. This update is scheduled for mid-June, and until then, you can only get Crown Crates through Crowns, available for purchase on Steam or on the official site. It’s a welcome change, but one that has raised eyebrows among the community, who are curious about pricing, item rotation, and that sort of thing.

Bethesda has seemingly made this announcement apropos of nothing, but it does fall in line with Microsoft’s loot box policies, one of which states that “Items in loot boxes can always be earned through play.” Let’s not forget Microsoft is Bethesda’s parent company now, after that landmark acquisition last year.

The Elder Scrolls Online’s next expansion, Blackwood, arrives on June 8 – here’s a trailer: