As the days grow chillier and 2020 draws to a close, so too does The Elder Scrolls Online’s year-long adventure, The Dark Heart of Skyrim. Markarth, the fourth and final portion of the MMORPG’s voyage into Tamriel’s frostiest region, takes us into the “untamed Reach” – one of Skyrim’s nine holds, the capital of which is the titular Dwemer City of Stone – and brings an “epic conclusion” to its vampire-riddled storyline. If a whistle-stop tour of the DLC with the RPG game’s devs is anything to go by, there’s plenty to sink your fangs into. Spoilers ahead, folks.

The Reach, Skyrim’s westernmost hold, is instantly familiar from The Elder Scrolls V even though ESO is set a millennium earlier in time. I saddle up with lead content designer Jeremy Sera on an insectoid Dwemer buggy – the new group mount – with lead gameplay designer Rob Garrett alongside on a boring old horse. The buggy is the perfect ride for exploring the Reach’s rocky terrain: it can scutter up Skyrim’s byways like a clanking metallic spider. Be warned, though – as Sera jokes, and I discover later at a river crossing, “If you have an incompetent driver, you might end up swimming”.

Though its battlements are more primitive, with logs and tattered banners flanking its walls, Markarth is unmistakable. The city’s recently been taken by The Reachmen, Sera tells me as we approach – these are a collective of clans led by Ard Caddach, the so-called ‘Despot’.

He’s “King of the Reachmen, though they wouldn’t say they have a king because they all argue too much. He’s more like the guy who yells loudest and they just generally agree they’ll listen”, Sera laughs. On the orders of their shouty ‘king’, the Reachmen are sheltering inside Markarth for fear of the malevolent Grey Host. They’ve been making trouble in the area, and the Despot’s struck an uneasy truce. Lucky those stone ramparts are chonky. 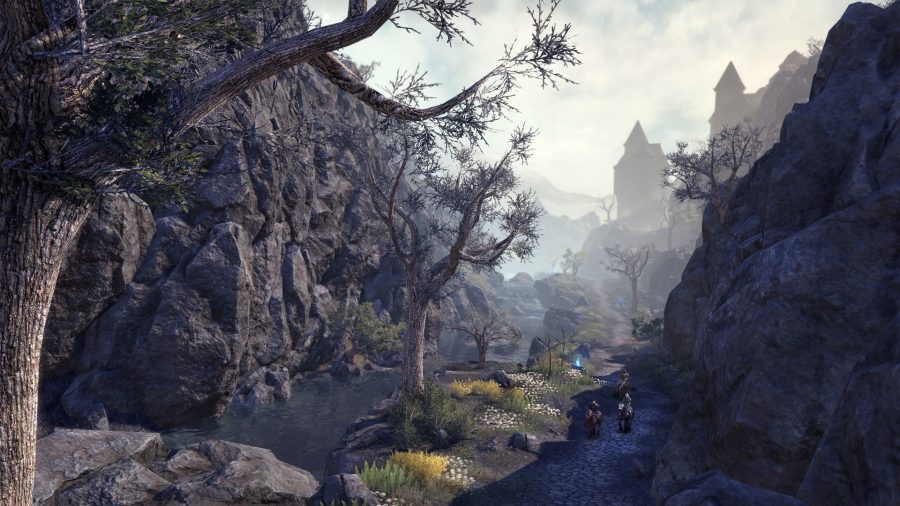 Markarth is the same labyrinthine network that Skyrim fans will recall, hewn into the Druadach Mountains. It might have ESO’s essential facilities – a crafting hall, a wayshrine, a bank, some justice houses, and NPCs like junk dealers – but its bones are the same. Understone Keep is still the granite heart of the city, its familiar waterfall billowing over its façade. And lordy, the steps are back. So. Many. Steps. The flavour’s a little different, with Reachmen symbols blanketing everything. And more than once a Reach guard lurking in the shadows, clad in what I’m sure are bones of mischief-makers past, scares the bejeezus out of me. No cuddly arrow-meets-knee memes for them, no sir.

No cuddly arrow-meets-knee memes for the Reach guards, no sir

Jump scares aside, there’s a new player house called Stone Eagle Eyrie tucked away in a corner to retreat to (I don’t get a glimpse, but Sera says it looks “awesome“). There’s also sightseeing, courtesy of a throne plonked on a rock platform overlooking the city – “by far, the best seat in Markarth”, the dev jokes. You’ve got to watch that edge, though – I trip right off. All in the name of assessing Markarth’s impressive verticality for you lovely readers, of course.

ESO’s Understone Keep isn’t just the seat of Markarth’s power – it’s a melting pot where different core characters from The Dark Heart of Skyrim can make an appearance. I won’t spoil who, but expect to encounter a key player here “who’s maybe not what she seems”. Hmm. 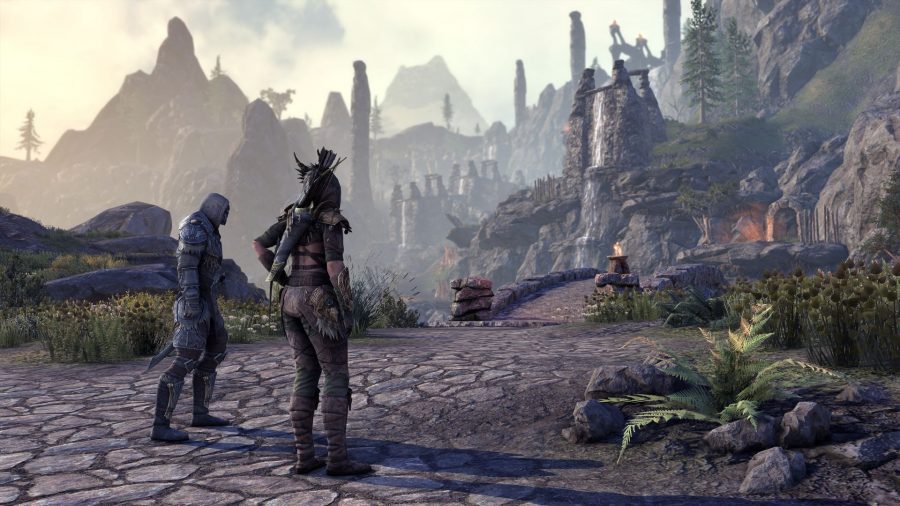 Beyond the city, we head into The Reach’s greener biome, but this isn’t any regular sightseeing cruise. From the back seat of the Dwemer tour-bug, I notice those pesky Harrowstorms are popping up here, too – introduced earlier this year, these are swirling vampiric vortices that transform anyone they gobble up into fanged beasties. You can eradicate them with a skilled team of eight (preferably more), but as we’re reminded by wandering into one as a group of three, they’re really bloody hard. Colossal Blood Knights and Abominations don’t take kindly to our attempts at Harrowstorm maintenance. Succeed, and you’ll stop a half-century-old Grey Host being resurrected, though.

Nearby is a prime example that, as Sera explains, “not all Reachmen are friendly”. We have a knockabout with some grumpy clansfolk in the Wildspear camp, and if Skyrim fans have been getting vibes of the Forsworn from their description so far, the Wildspears are really driving said vibes home for me, what with all the animal bones, arrows, and fireballs. When not interrupted by our gung ho charging, a Wildspear Vinecaller will perform a dance around a ritual stone, which holds an achievement if you kneel at its foot.

Gang together: The best multiplayer games on PC

Stepping over a poor soul who’s dropped some goodies at the camp’s edge – the beginning of an independent content quest – I catch my breath; I can see Sky Haven Temple. I’m told I can’t venture there, but that’s ok. Seeing it lodged in the mountains, mist draping its courtyard, gives me a wonderful sense of place as I gulp back a pang of nostalgia. “A thousand years from now, you’re going to kick off the Blades there,” Sera says.

“Right now, nobody’s doing anything. It’s supposedly abandoned, and we won’t know because we respect the lore. We’re told that it was abandoned and we’re going to leave it at that. But it’s such a cool spot, and it would exist whether or not we [physically] went there. It’s important to us that we put all of the pieces in the map that should be there.” I’m very glad they did. 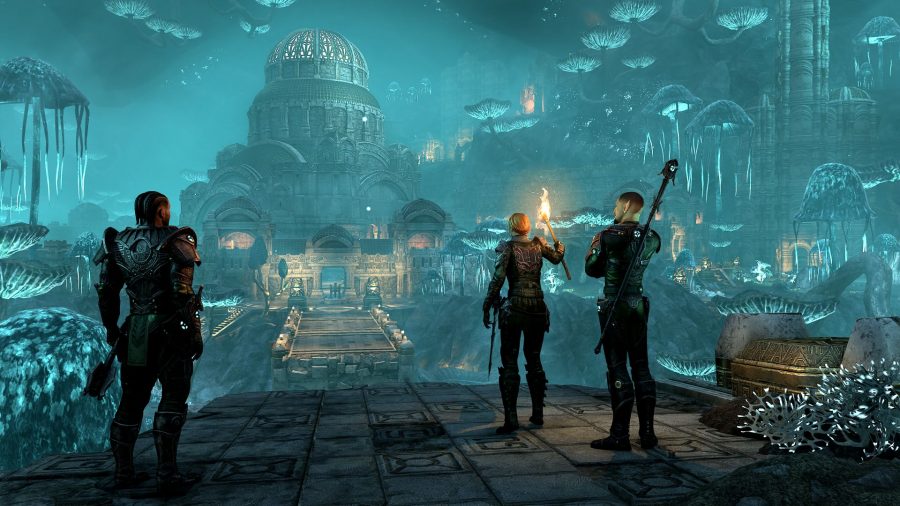 The tinky tarantula tour bus also stops at Lost Valley Redoubt and Gloomreach. Skyrim fans will remember the former well: it will one day be a huge Forsworn encampment nestled around a jagged rock face. In the present, though, the Grey Host has taken it to guard “the bad-guy witch clan that you work against in this zone, who are trying to create this nasty ritual which basically steals souls”. Yikes.

It's Revenge of the Falmer - creepy, devolved elves that love to ambush aspiring plunderers

Gloomreach is one of the zone’s two delves. Its quest features a mage who was experimenting with teleportation spells when “the vegetation really got nasty, and something strange happened”, as Sera says. Critters in the depths are astonishing: a vale deer buck glows with fluorescent markings, having acclimated to the gloom many generations past. And eaten a lot of “glowy stuff”, too. As for the quest’s baddies, it’s Revenge of the Falmer – those creepy, devolved elves that just love to ambush aspiring plunderers.

Delving deeper, we find a trapdoor to one of the DLC’s most impressive new areas: Blackreach. Or, rather, more Blackreach. The Markarth pack’s portion of Skyrim’s bioluminescent rave cave is lit with the sea-green glow of a zillion giant mushrooms. Think big fungusy chandeliers. In ESO, Blackreach has become vast, stretching all the way under The Reach as well as western Skyrim, and beyond. “You could actually start at Eastmarch, walk all the way underground, and never see the surface until you walked out on The Reach,” Sera explains. 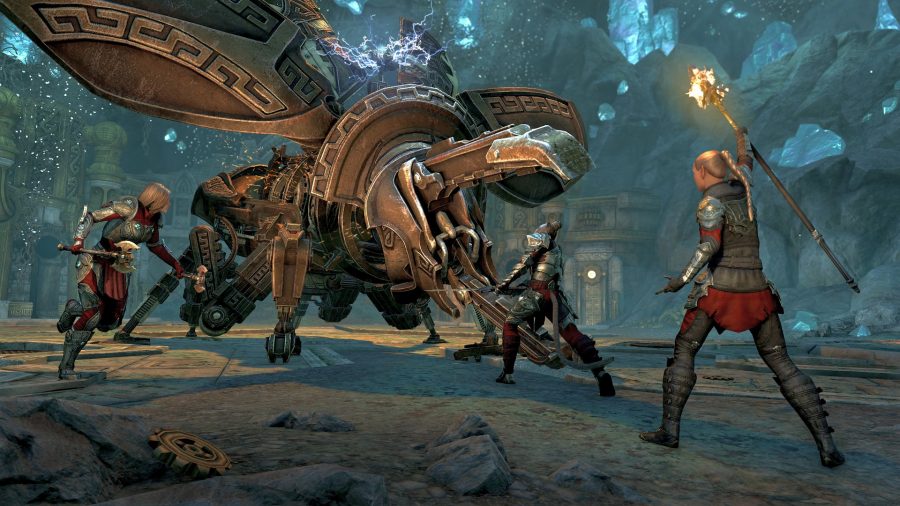 Aside from the creepy crawly Chaurus, I discover a nifty feature called a Void Anomaly, which lets you hop across to otherwise unreachable parts of the region’s crumbling ruins. It’s worth the trip up – there are goodies like Skyshards to be found. The jewels in Blackreach’s crown, though, are the dwarven ruins inside, one of which is the imposing Library of Arkthzand. You’ll visit multiple times in the main quest, Sera explains, working with certain characters from this year’s storyline to discover exactly why it’s such a crucial location at its conclusion.

It’s a particularly well-guarded library, too: it’s patrolled by Dwarven Scorchers – automatons; angry but empty suits of armour. Nearby, at Sentinel Point, there’s even an enormous mechanical bug called a Dwarven Dynastor Supreme that flaps its plate wings menacingly as we approach. It’s like Dim from A Bug’s Life, but if he was stripped back to a hunk of malevolent bodywork instead – though I’m told it can shapeshift, too. Gulp.

If you complete the whole of western Skyrim’s storyline and then Markarth’s, you unlock a special quest that takes you and a gaggle of the storyline’s core characters on a hunt to track down the arch-vampire, Lord Rada al-Saran, and “in true superhero style, take him out”, Sera explains. “It’s a really cool quest line. It ends in an entirely different world space, which is a lot of fun, and is also the culmination of the entire ‘year of’ storyline.” Everything you’ve done along the way, each figure you’ve met, it’ll all come together at the Dark Heart of Skyrim’s climax.

It’s not all about Rada al-Saran’s shenanigans, though. You can also tackle two zone objectives in The Reach: Karthwasten and Reachwind Depths. In the latter, you work with returning Khajiit Adusa-daro “to save a vampire from his bad past”, and stop a nasty vampiric clan that’s been preying on the locals. What are they like. 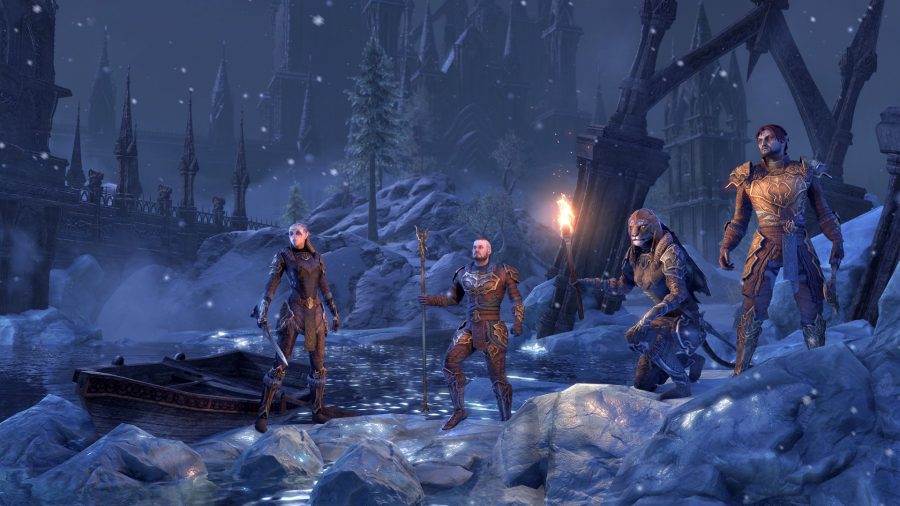 Additionally, there’s a brand-new solo arena jammed with veteran content where you can test your mettle. Unlike Maelstrom, there’s no predetermined sequence this time – you have some control over the order in which you face your enemies, and there are some nifty new strategies and tools to make use of as you progress. That’s not to mention the base game update that arrives for all players, which reintroduces a PvP normal queue so you can matchmake with your pals again. WHEW.

The Elder Scrolls Online’s Markarth DLC is out later today.