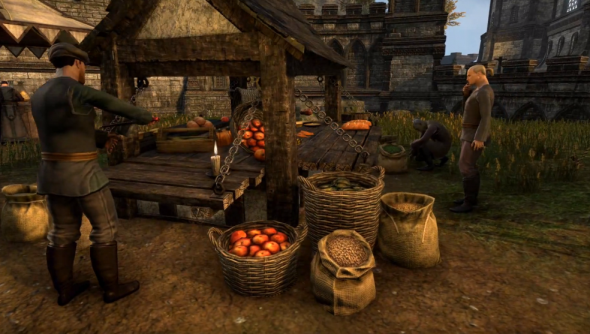 The Elder Scrolls Online will adopt a Guild Wars-style single payment model come March 17th. Less than a year after the MMO’s launch attached to a monthly subscription, Bethesda have seen fit to allow players into the expanding game for a one-time purchase.

“Our fans are our biggest inspiration, and we’ve listened to their feedback on the entertainment experience they want,” said ESO director Matt Firor. “We know that Elder Scrolls fans want choice when it comes to how they play and how they pay, and that is what they will get.”

The Elder Scrolls Online, now subtitled Tamriel Unlimited and scheduled for the new consoles on June 9th, will be subscriptionless nearly three months before on PC and Mac.

Zenimax insist there’ll be no content-gating: all of the launched game will be there, along with all of its existing updates and future Justice and Champion systems.

All current ESO accounts, open and closed, will be updated to reflect the new payment model in March. Subscribers will automatically become premium members – privy to in-game bonuses, guaranteed access to DLC, and an allotment of Crowns for a monthly fee.

As you’ve probably already surmised, Crowns are the paid-for currency spent in an in-game store also arriving in March. That’s how Bethesda intend to make their money in ESO from now on: with convenience items, customisation options and extra DLC. Non-paying players are ensured a regular cadence of updates and new toys, however.

“We have made numerous changes to the game over the past year, and are confident this is a game that Elder Scrolls fans will love to play,” said Firor – now speaking directly to Skyrim fans.

“Players can explore Tamriel with friends, battle creatures, craft, fish, steal, or siege. The choice is theirs. The game offers hundreds of hours of gameplay with unlimited adventures with one single game purchase.”

It’s actually the perfect time to think about ESO again. Once short on systems to play with, it’s now getting killable NPCs and theft. Reckon you’ll reconsider?