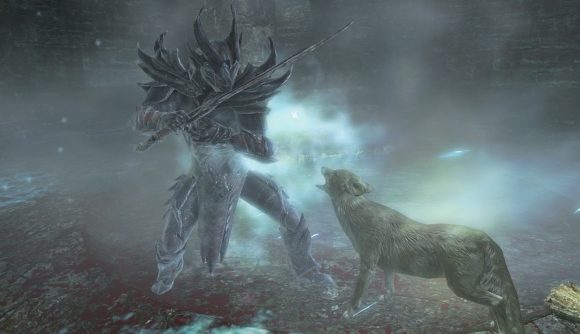 Foxes always sound surprising to me – they sound like little cartoon characters giggling uncontrollably. At least, that’s how they sound when they’re operating normally. This Skyrim mod adds a fox companion that sounds surprising in a completely different way: this one uses the Thu’um. Imagine, a little fox friend who can Dragon-shout a troll off one of the peaks of High Hrothgar!

That’s what the Dovahfox mod does, and once it’s installed, you can head up to High Hrothgar to find him waiting for you in the courtyard. Once he’s your companion, you’ll find that he can perform all the normal companion abilities like carrying gear, follow commands, and fight at your side in battle. He’s also imbued with the power to use the Fire Breath, Frost Breath, Drain Vitality, Cyclone, and Unrelenting Force shouts – Fox-ro-dah, friends.

Being a fox, he gains other advantages: he’s a fox that glows like a magelight, modder SuperboyPr1me explains, and he won’t affect your stealth in any way, or set off pressure plates. Very handy indeed.

SuperboyPr1me says this is his first-ever mod, and meant to be a more lighthearted addition to the game. He also offers a couple suggestions: since Dovahfox uses the MaleDrunk voicetype and the default follower framework, you may want to install the following mods along with Dovahfox:

There are plenty more Skyrim mods to choose from – hundreds, in fact – to the point where you can pretty much transform it into a completely different RPG game than the one that Bethesda first launched nine years ago.