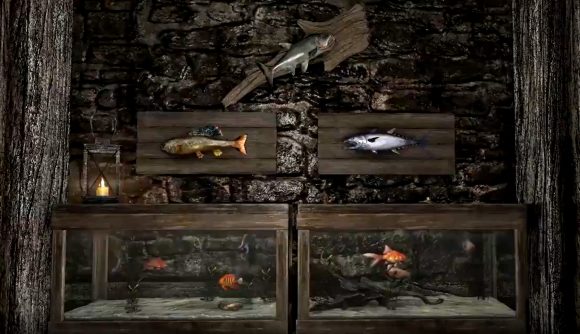 We already knew that Skyrim: Anniversary Edition would bring us fishing, but now we know a bit more of what we can actually do with those fish. Namely, we can build aquariums. Bethesda has brought us a new teaser for the update showcasing the aquarium feature, and the ten second video offers plenty of insight into how it’ll work.

You’ll be able to build aquariums in your Hearthfire homes in either Anniversary Edition or SSE as of November 11. (We know that fishing will be part of a free update on that date, and it looks like aquariums will follow suit.) The teaser shows a number of different fish species cohabitating a single tank, and the tanks appear to have some distinct decorations between them, including driftwood and shells. We also see a number of fish mounted as trophies. (Perhaps as a warning to keep the pets in line.)

Surprisingly, the world of Skyrim mods doesn’t actually provide us with much in the way of fish tanks. It looks like Bethesda has somehow managed to find a way to fill a niche the mod community has not.

Don't tap on the glass. They don't like that…

Add an aquarium to your Hearthfire homes in Skyrim Special/Anniversary Edition on November 11 for all your fresh catches 🐟 #Skyrim10 pic.twitter.com/jAh1vjC5Qm