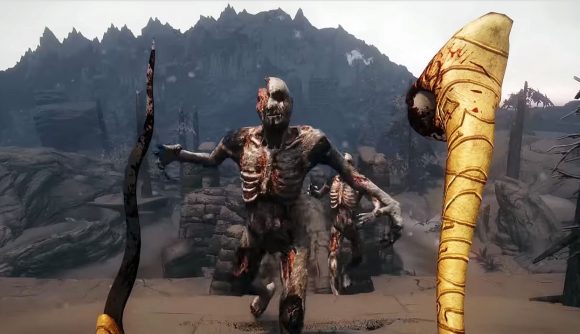 Beyond Skyrim is a massive mod that aims to recreate the entirety of Tamriel within Skyrim’s engine. The team has had an early focus on the region of Morrowind – perhaps due to its adjacency to Skyrim or its enduring popularity with fans – and this is reflected in a new trailer, which you can watch below.

The trailer shows off a range of new weapons, enemies, and locations. Some assets are familiar from Skyrim’s Dragonborn expansion, which took players close to Morrowind via the island of Solstheim, but there’s a lot of original work. There’s even a hint of a story – the narrator, who ferries travellers around for gold, says House Redoran (one of the six great Dunmer houses) has been colonising a number of weatherbeaten isles, including Bleakrock Isle and Sheogorad.

These places constitute ‘the New North’, after which the trailer is named, and which the player will explore. In a development diary last week, the Morrowind team also says the landscapes of the mainland are progressing well, while writers are building quests.

You can check out a map of Morrowind as planned here, or see how things are coming along in the New North trailer below:

The Beyond Skyrim team is actively recruiting contributors via this application form. Of the dizzying number and variety of mods Skyrim has given us, Beyond Skyrim must be the most ambitious – if it ever gets finished it’ll go down in history, so do consider helping out if you can.