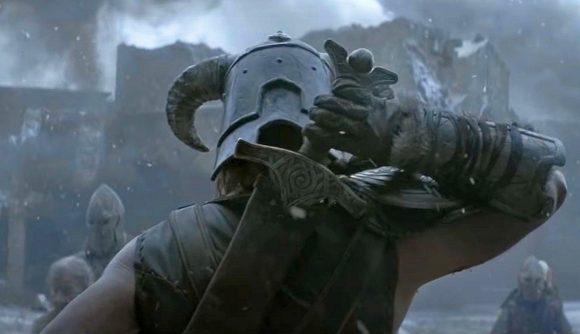 “Hey you. You’re finally awake.” It’s an opening so famous it’s transcended Skyrim and is probably quotable by many of those who’ve never even ventured into Bethesda’s behemoth fantasy game. It’s also known for its slightly, erm, rebellious nature, with the horse cart occasionally prone to misbehaving and veering off its path. But, it turns out that another, different kind of bug once threatened to derail the iconic intro: a humble bee.

Nate Purkeypile – who is now the founder of indie studio Just Purkey Games but previously worked on many of Bethesda’s games, including as senior world artist on Skyrim – has posted a tale of game development on Twitter. Illustrating how tough it can be, Purkeypile explains that the fact that the famous cart ride is “physically simulated” meant that “all kinds of things would cause the cart to start to freak out and fly off the road”.

Whether this was a bumpy road, an obstacle, or just a physics bug, all kinds of things could cause the cart to stray from the path it wanted to follow. “Well one time, riding that cart yet again, the cart starts to shake violently and all of a sudden WHOOSH! The cart goes up into the sky like a rocket ship. Like WAY up there,” Purkeypile explains.

“Something was telling that cart to just f*** right off and to get off that road,” he says, explaining that no one on the team could fathom what was causing it – and that it wasn’t happening every time. The answer? A very stubborn bee. Purkeypile says another bug in the game that prevented the bee from being picked up was the root of the issue. Once this got fixed, the bee went from not only being available to pick up, but made it collide into other things. So, you can see where this is going.

Well one time, riding that cart yet again, the cart starts to shake violently and all of a sudden WHOOSH! The cart goes up into the sky like a rocket ship. Like WAY up there.

“That bee was an immovable force of nature if it ever happened to cross the path of the cart,” the devs says. “The cart wanted to move down the road. The bee did not want to move. So up the cart goes!”

The conclusion to draw from this, of course, is that game development is really tricky. “Every time you fix one thing, you might be breaking another. This is especially true about open-world games. Yet, that interplay of all the systems is what ends up making them all super interesting,” Purkeypile adds.

So game development is hard. Every time you fix one thing, you might be breaking another. This is especially true about open world games. Yet, that interplay of all the systems is what ends up making them all super interesting.

There’s no arguing with that. If you agree, you can head to our rundown of the best open-world games on PC for more adventures in big spaces crafted by some pretty darn talented devs. Just watch out for any bees.