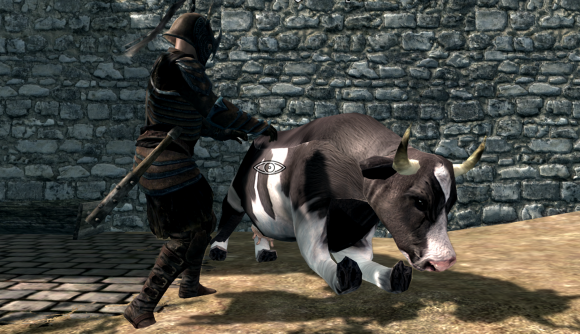 One of the best things about the modding scene on PC – especially the Skyrim mod scene – is when a clever creator comes up with a new mod that makes you wonder how the heck no one came up with it previously. We’ve got just such a mod on our hands here – a new Skyrim modification that allows cow tipping. Yes, cow tipping.

The frankly genius mod is based on Fallout 3, which does allow players to tip the game’s two-headed Brahmin cows by sneaking up to them and pushing them over – which doesn’t really hurt them, but it’s amusing. Despite Skyrim coming out after Fallout 3 and having hairy Highland-style cattle, you can’t really push them over. You can Dragon Shout at them with Unrelenting Force, but that’ll probably kill them – and get the guards on your case.

Now with the Simple Cow Tipping mod created by T3alrose, you can now sneak up to those cows and gently tip them over – at the cost of a little stamina. It’s worth it.

You can see the mod in action in the video below. There’s even a little pushing animation if you use the mod in third-person. As you can see, the cows get up after being pushed, and are totally fine afterwards. So you can do it again.

As it’s important to point out, T3alrose adds the disclaimer, “before you take this mod too seriously – no, I don’t hate cows and I respect any kind of animal in real life.” Unfortunately, they also add that the cow tipping mod is incompatible with other cow-based mods, such as milking mods. Yes, those exist too.

Related: Check out the best Skyrim mods around

Cow tipping is possibly the most unusual mod we’ve seen for Skyrim recently, but it’s certainly not the only impressive one. We’ve seen mods that overhaul the game’s underwater areas, add nicer flora and fauna, and even add a ghost horse. We have no idea what’s coming next week in the world of Skyrim modding, and that’s the way we like it.

No cows were harmed in the making of this mod.