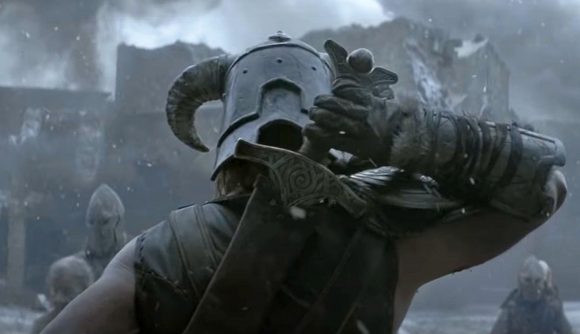 A couple of weeks back, we reported on a Skyrim fan's stunning recreation of the fantasy game's glass war axe, which frankly proved 3D printing is in fact an arcane and wonderous magic. Now, the stakes have been raised by another fan who's shared their own (equally glorious) 'glass' battle axe, and the result is inevitable: Redditors are calling for an epic duel.

It's been a big day for Skyrim's glass axes on the RPG game's subreddit. The creator of the recent single-handed war variant, 3DPrintOrlando, has posted footage of yet another wonderful recreation from the weapon line – this time, the much larger, two-handed battleaxe version (which you can check out below). As with last time, it's been brought to life using 3D printing and is a very faithful rendition of the in-game original, though the difference here is the battleaxe is a whopping 48 inches long, so a pretty major undertaking for a 3D printing project. Phwoar.

Now, another glorious recreation has appeared on the subreddit in reply. “I see that glass battle axe and I raise you the glass war axe I resin printed two years ago,” posts user Fitcosplayer. And, again, it's a hugely impressive take on Skyrim's own.

As you can see in the post’s images, the resin version captures the somewhat antique look of one of Skyrim’s most ornate weapons, and the translucent turquoise ‘glass’ blades are drool-worthy. It’s easy to see fans’ excitement, with each post sitting at 13k and 12.3k upvotes, respectively.

Now, Redditor Thatguy01220 has captured what most likely springs to many fans’ minds on seeing the two axes in another post: that this means a duel is surely needed to settle the battle of the, er, axes once and for all. That is the Dragonborn way. But, that’s far from likely, as the two creators have actually exchanged compliments over each other’s incredible recreations in the later post’s comments. 3DPrintOrlando has noted that the older resin version helped provide reference for their own axe, while Fitcosplayer says they can’t wait to see what the other creates next. It’s all very lovely and wholesome.

Only one way to settle this… u/fitcosplayer and u/3dprintOrlando need to duel. from skyrim

As for what might come next, 3DPrintOrlando says they’re “currently finishing the Half-Life H.E.V. suit” which they can use to cosplay as Gordon Freeman. So, perhaps no posts of more Skyrim glass weapons next, but something to get Half-Life fans excited instead.

Roleplay away: Grab Skyrim here if you haven’t already

For now, be sure to check out our rundown of the best Skyrim mods on PC if you’re keen to do some creating and experimenting of your own.