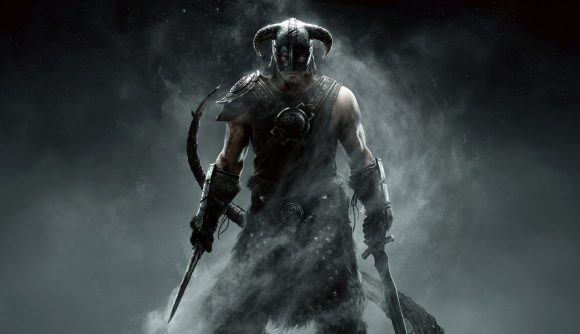 The glass war axe is one of the most majestic weapons in Skyrim. Hewn from shimmering turquoise, well, glass and antique gold metal, and one of the more ornamental of the RPG game’s weapons, the double-headed war axe is both a treat to look at and to swing at Tamriel’s endless bloody draugrs. Now, a Skyrim fan has made a stunning recreation of it using the arcane magic of 3D printing.

The creator behind the replica, 3DPrintOrlando, has posted footage of the recreation being twirled and shown off in the sunshine, and the finished result is incredibly impressive. From the glossy effect, glimmering blue-green glass, and ornate carvings of the hilt, it’s hugely faithful to the one found in Bethesda’s open-world game – and other Skyrim fans seem to agree. The cross-post on the RPG’s subreddit alone has hit more than 11.4k upvotes as of writing.

The creator – who explains they run a hobby shop in Orlando and have “introduced hundreds of people to the hobby from eight to 80 years old” – says the axe took around “25 hours in design and maybe 50 in printing” to bring to life. Phwoar. “It’s quite a few parts and some require adhesive, so it’s a time-consuming process to assemble one,” the creator adds.

It’s not the only thing from Skyrim’s dazzling glass weapon line they’ve recreated so far, either – they’ve also done a pretty spectacular job crafting a real-life replica of the glass mace, too. Here’s the glass war axe:

I Designed and 3D Printed the Glass War Axe from skyrim

If you’re curious about the kit used to do the job, the creator explains they used the “Zyltech Gear with an E3D hot-end and dual 5015 cooling fans”, also saying that it’s made up of 12 pieces in total. It’s an impressive creation, and has got many a Skyrim fan drooling over it so far – perhaps we’ll see more in the future.

For now, be sure to check out our rundown of the best Skyrim mods on PC if you’re looking to get more out of your game.