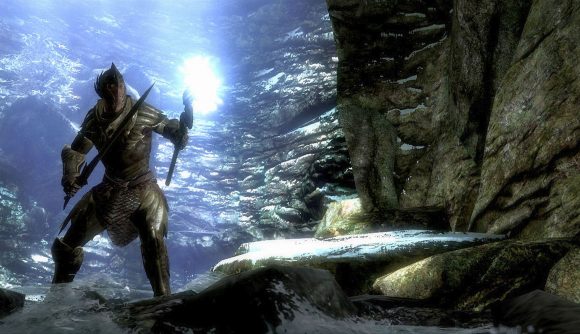 Everyone who’s played Skyrim knows that, with a pickaxe in-hand and a can-do attitude, the Dovahkiin can go prospecting in the fantasy game’s mines and dungeons to chisel themselves out some handy ore. What it seems a whole bunch of players didn’t know is that you can speed up the somewhat tiresome task of doing it by skipping the mining animation entirely – and people are very excited about the discovery.

Yesterday, Skyrim subredditor JRnalistic24 posted a screenshot of a conversation they’d seen in which this little titbit was illuminated – that is, that you can simply hack away at an ore deposit with your pickaxe, as you would a bandit with your war axe, to get the goods instead of having to sit through the slightly lengthy mining animation time and time again. “TIL I just wasted hundreds of game hours,” the user joked in the post. Turns out, that was a bit of a ‘TIL’ moment for plenty others, too.

As of writing, the post is sitting at just under a whopping 14,000 upvotes – far more than the vast majority on the subreddit’s front page – and the comments are jam-packed with Skyrim fans exclaiming variations of “ARE YOU KIDDING ME”. Others say they discovered this little hack a while back, though still a long time into playing the game.

Since everyone seems to be going crazy over being able to skip the pickaxe animation, I figured I would show everyone how much faster it can be. from skyrim

While you’d have to have done a lot of mining to have wasted hundreds – or even tens – of hours on the old-school way, it sure is useful to know there’s another way if you’re planning on plundering all the ore your Dragonborn can carry, and want to shave the time down a bit.

If you’re looking for other ways to jazz up your experience in the game, be sure to check out our rundown of the best Skyrim mods on PC at that link. Just think of all the mods you could try with all that extra time on your hands.