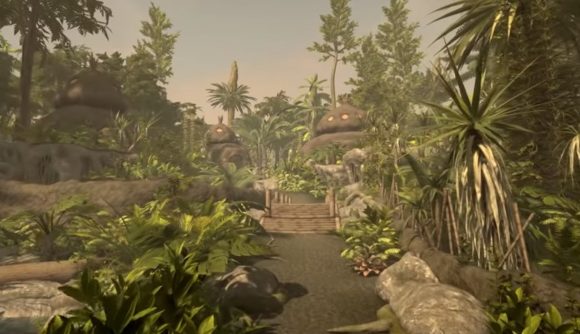 The team behind Skyrim mod Beyond Skyrim has released a first look at Black Marsh, a region from The Elder Scrolls Online that will soon be playable in the mod.

Beyond Skyrim is an environment mod that takes regions from other Elders Scrolls games, updates them, and makes them playable in Skyrim. A number of regions from around Tamriel are in the works, and the modders have just put up a comprehensive early look at the swampy Black Marsh. A prominently Argonian province, Black Marsh borders Morrowind to the North, and hosts a large population of tribes.

One of the main locations is the city of Gideon, located in the south, described as “the last bastion of Imperial culture among the tribes of Black Marsh”. The architecture is a “unique mix” of Argonian and Imperial approaches. Outside of the city-lines, the wilderness is home to villages and homesteads that use traditions stretching back as far as recorded history will go in Tamriel, and exploring, if you can handle the unpredictable wildlife, can lead to some interesting armour and loot.

You can watch the full David Attenborough-esque development diary below:

A couple of other teasers for Beyond Skyrim are up, letting you see around Iliac Bay and Roscrea, and you can download the city of Bruma from Cyrodiil right now to try out – as always, mod with caution. We got a new trailer for Skywind, a remake of Morrowind in the Skyrim engine, just recently too. While we await more news on these and The Elder Scrolls 6, here’s the best games like Skyrim.