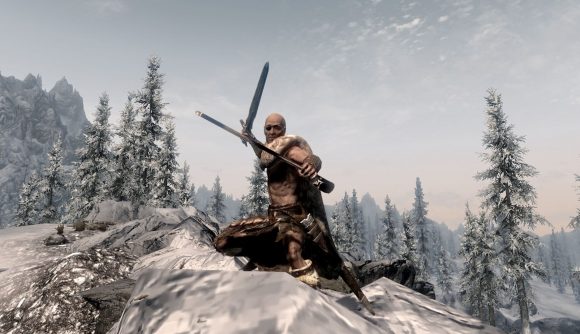 Some of the best Skyrim mods out there are ones that make weird and wonderful crossovers possible. Sekiro, Superman, and – heck! – even Dungeons & Dragons’ disgustingly squelchy Gelatinous Cubes have come to Tamriel in some shape or form, thanks to community creations. Now, you can even bring a bit of Discworld to Skyrim through a new mod that adds two new character races inspired by the Terry Pratchett novels.

Blueboar’s ‘Barbarian Hero’ Discworld character mod gives you the option of following “in the arthritic footsteps of Terry Pratchett’s Cohen the Barbarian”, the nonagenarian last and perhaps greatest of the novels’ heroic barbarians, through the addition of an ‘Ancient Barbarian Hero’ race. It’s for “elderly warriors who have survived to old age because they are very, very good at not getting killed”, the modder says.

It certainly would be impressive for a warrior to survive to that age with all those pesky dragons and draugr hiding around Skyrim’s every corner. But, that’s not all – you can also play as a race based on the (considerably younger) character that inspired Cohen: Robert E. Howard’s Conan the Barbarian.

The mod is aimed at players who like to specialise in one- and two-handed melee combat, and prefer a light armour to a heavy one, and includes some gear perfect for getting into character. With the mod installed, you’ll find a handy knapsack at the RPG game’s Standing Stones packed with all the goodies you’ll need to become the true barbarian: armour, “sturdy” boots (essential), a battleaxe, and a greatsword. Oh, and an eyepatch, if you want to be a true Cohen.

If you’d like to bring a little Discworld to your Skyrim, er, world, head to Nexus Mods here to pick it up. As ever, mod at your own risk! And be sure to check out what happened when Skyrim and The Witcher 3’s Geralt collide. Here’s a hint: Yennefer can beat trolls in a fight, any day.