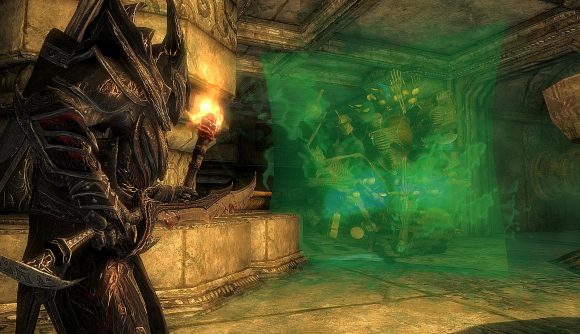 The Gelatinous Cube is one of the more intriguing monsters from the world of Dungeons & Dragons. It’s pretty self-explanatory – a ten-feet-tall cubioid of transparent, possibly delicious, jelly-like ooze. It’s also “an irrational predator that creeps silently into dungeons and shadowy caves” – and it’s come to Skyrim.

That’s thanks to modder Mihail at Nexus, who has uploaded the Gelatinous Cube as part of their ‘Monsters and Animals’ series. At first, the creature seems pretty benign – I mean, it’s a giant cube of jelly, after all – but it’s actually a pretty stealthy, and pretty terrifying monster to stumble upon in one of the RPG game’s many dungeons. “As they walk through the corridors of the dungeons, they absorb any material (dead or alive) in their paths, to be digested later inside their acidic bodies,” the description reads.

“Despite their low speed, the gelatinous cubes are strong and could easily engulf even large creatures,” it adds. “Upon touching a creature, the cube secretes a gooey substance that is immediately absorbed by the skin into the victim’s bloodstream, causing immediate onset of toxic digestive corrosion.” Gulp.

Sounds scarier than the hordes of dungeon-dwelling Draugr you’ll be used to encountering in your plundering. Take a look at the Gelatinous Cube, as seen in Skyrim with the skeletons of felled Tamriel folk suspended in its ooze, below:

Mihail says the mod brings two variants of the all-new creature to the game, with new sound effects, spells, goodies to loot, and behaviour, too.

Related: Check out the best D&D games on PC

If you’re keen to bring Dungeons & Dragons’ novel and squelchy foe to Tamriel’s frostiest region, you can find Mihail’s mod right here. As ever, mod at your own risk! Oh, and do take a look at our list of the best Skyrim mods if you’re keen to tinker with your game and see what else is out there.