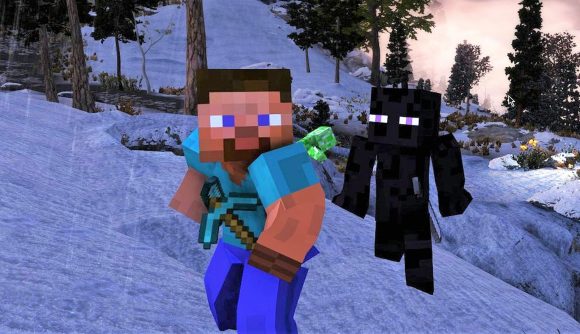 Earlier this year, Skyrim’s Dark Brotherhood made its mark in Minecraft (well, kind of), and now the RPG game’s and sandbox game’s worlds collide again, thanks to a new remaster of a mod that brings a whole lot of the block builder to Tamriel. Including Steve. Minecraft Steve.

In celebration of the intrepid, teal-shirted Minecraft hero’s impending leap to Smash Bros., modder Kaiserwill has remastered an old mod called ‘Minerfriends’, created by user Poisu555 way back in 2012, with “tons of new additions!” The mod builds on the original – which brought Steve to Tamriel as a follower along with some Minecraft mobs – with a whole bunch of extra goodies.

These include a small dungeon complete with boss fight and “Minecrafty rewards”, an all-new-and-improved Steve and “Stevefan followers”, skeletons and saddled pigs to summon, a new Enderman companion for your travels, and a bunch of other mobs based on the block builder which can be found in some of the base open-world game’s dungeons. Oh, and “Steve is thicc“. Nice.

Alongside these, the ‘Minepals’ mod brings “iron, gold, diamond and netherite swords and pickaxes”, some mob masks that come with “special effects”, some easter eggs to be found in Steve’s little house, a villager with “a robbable secret stash” (also in Steve’s home), and a “funny dog”. That’s a work-in-progress, but hopefully still plenty funny. 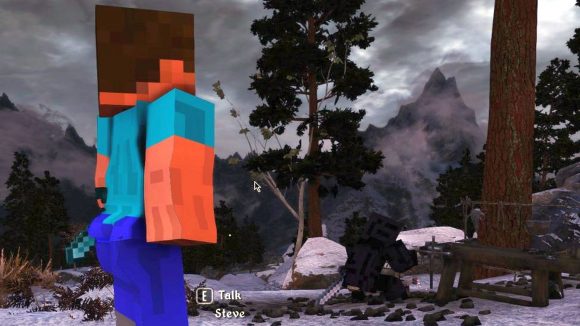 You can find the newly-remastered and fleshed out Minecraft-Skyrim mod at Nexus here if you’re keen to bring Steve and pals to Tamriel’s frostiest region. As ever, mod at your own risk! And be sure to take a good peep at our rundowns of the best Skyrim mods and best Minecraft mods if you’re keen to tinker with either – or both – some more.