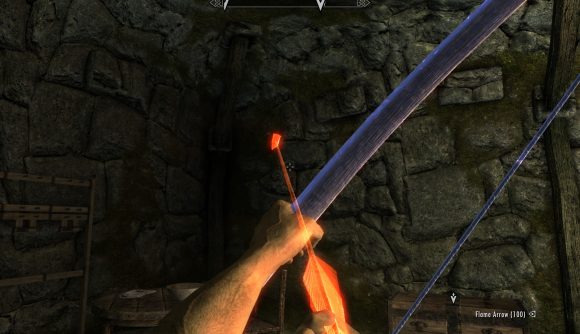 The best way to make the return trip to Skyrim is to do it with a completely different class than you used last time, and Muken’s Arcane Archery (or ‘Marc’ for short) adds one of the more interesting new classes seen in a while. Using this mod, you can elect to become an arcane archer, a combination spellcaster and ranged weapon user.

This is a remarkably well thought out mod: to become an Arcane Archer, you’ll first have to find yourself an Arcane Bow. These can be found at the Riverwood Trader or at the merchant in Winterhold, but you can also pinch one off Farengar’s desk at the college. You can also DIY one by learning the novice-level Arcane Binding enchantment, which you can use on any mundane bow to make it arcane.

Arcane Bow in hand, it’s time to set stuff on fire. You’ll learn conjuration spells to summon arrows of various elemental types, and there’s an adept-level spell called Elemental Quiver for summoning the five elemental arrow types at once so you can swap between arrows at will.

That’s only the beginning, though. Arcane Archers can also learn Destruction school sigils, which you can cast to modify all arrows of a particular type. This lets you effectively ‘mod’ your arrows to combine various spell effects, and having different sigils active means you can organise effects by element.

The most recent addition to the mod is spell engraving. This lets you engrave a spell you have equipped onto a type of elemental arrow. This done, you’ll be able to use a ‘tap’ ability to activate that spell while the arrow is in flight. The effect of this is to allow you to very accurately cast massive area of effect spells at long range.

Check out the Marc page on Nexus Mods for a complete rundown on how it all works and to download it for yourself. And for more, have a look at our list of the 100 best Skyrim mods.