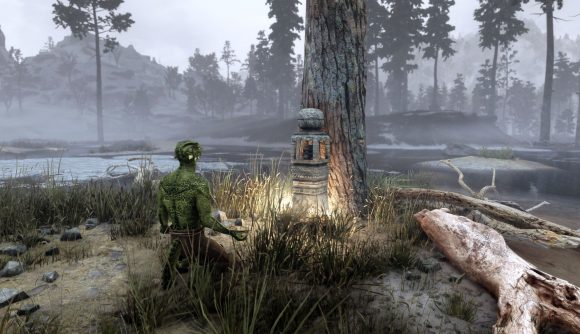 While not always at its forefront, religion is an important part of Skyrim, with its hardy folks’ worship of the Nordic Pantheon, Daedra, and – for some – even Talos, adding some key background and characterisation to its places and people. Oh, and a whole lot of shrines offering handy status effects, too, of course. Now, some modders are looking to put a whole new spin on this element of the fantasy game with a “complete overhaul” of its religion system.

The mod is called Pilgrim – A Religion Overhaul and, among other changes, it “adds dozens of new deities and with powerful shrine effects to the game”, as creators Simon Magus and Tate Taylor explain on the mod’s page. The mod adds two perks to the RPG game that essentially breaks out religion into two types: pilgrims and cultists. The former is found in the game’s restoration skill tree and is linked to the more benevolent gods like the Divines, their chief god Auri-El, and the Skaaal of Solstheim’s deity All-Maker. The cultist branch, on the other hand, is tied to the malevolent Deadra, the ‘worm king’ Mannimarco, and the ‘dread father’ Sithis.

These perks have two ranks, with a level 30 one doubling the strength of shrines’ effects, and the other at 60 offering an additional bonus effect.

The mod adds a ‘prayer’ mechanic that comes into effect the first time you interact with a shrine, and lets you receive a blessing from the most recent shrine you visited by meditating. As for those dozens of new deities, you’ll find lots of new names and shrines popping up alongside the ones you’ll recognise from the base game, with rare and more tricky-to-find shrines bearing the names of Auri-El, Pelinal, Y’ffre, and others in the benevolent deities category.

More malicious shrines are dedicated to Deadra and other less friendly figures from The Elder Scrolls’ lore, like Malacath, Hircine, Sheogorath, and others. Each of these new monuments has its own set of buffs and effects, with the different types determined by the relevant perks’ levels. 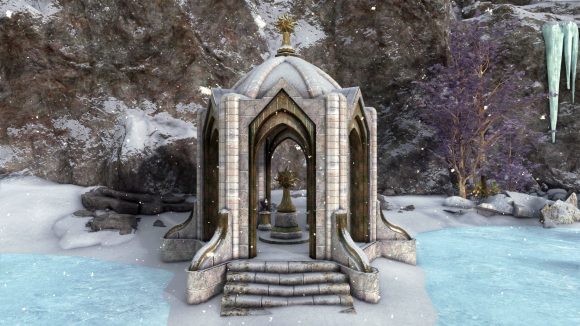 Another new spin the mod brings is that you’ll find healing and cures for diseases won’t be given by interacting with shrines. Instead, the mod will turn one of the priests found in each of Skyrim’s big five cities into a “special class of vendor”, each of whom will dispense “healing and defensive items such as potions and scrolls” that’ll do the job that shrines did before, as well teleportation scrolls that let you zoom to their respective temples in no time.

If you’re keen to give Skyrim’s religion and shrines system a whole new spin, you can find the mod at Nexus Mods at that link. As ever, mod with caution, and be sure to check out our rundown of the best Skyrim mods on PC if you’re after some more inspiration.