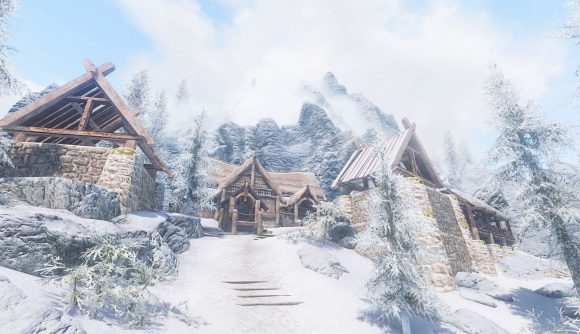 Jkrojmal's Stendarr Rising – The Hall of the Vigilant Rebuild mod tasks you with collecting materials to restore the hall. You can purchase them from the carpenter's workbench that's in a nearby shed. Don't fret about costs, though, as additional iron, silver, and clay deposits have been added to the area to help you out. You can also purchase things like lumber from sawmills and glass and straw from the Riverwood trader.

You can recruit up to eight Vigilants to aid in your restoration efforts. Some of them will guard the gates around the clock and patrol the perimeter, and others fill roles such as trainers or followers. You can also get two armoured huskies and a horse from the workbench.

Things do, however, get challenging when you repair the door to the hall. Once you hit that point, vampires and werewolves will get wind of what you’re up to and try to raid the village in the dead of night. Attack frequency and strength is random and will occur between midnight and dawn.

The experience is also customisable. You can tweak the creatures’ attack strength and frequency or disable it if you’d prefer that. Jkrojmal suggests using the Timing is Everything, Better Start Timing for Dawnguard and Dragonborn, or Dawnguard – Hall of Vigilant Requirement mods with this one to control when Dawnguard starts.

Fancy downloading this one for yourself? You can find it alongside instructions on how to download it over on Nexus Mods. For more of the best Skyrim mods, you can hit that link.