Skyrim is one of the biggest and best open-world games of the past decade, so there’s plenty of reason to put off its main quests, go tearing off into Tamriel’s frostiest depths, and spend your time pillaging dungeons, besting beasts, and supping tankards of ale in its many toasty taverns. After all, your main antagonist, Alduin, will be happy to wait until you decide to show up. Or, will he? Not if you pick up a new mod that starts an apocalypse timer ticking when you jump in.

Grasscid’s new ominous-sounding ‘End Times’ mod hinges on a simple but very pertinent question: “Tired of the Dragonborn prophecy’s success being a given?” The mod makes it so the elder dragon, ‘world-eater’ Alduin, won’t just wait for the Dovahkiin to finish up all their looting and draugr slaying before he’ll live up to his name and swallow Skyrim whole. Instead, the mod adds a customisable timer to your savegame, and you’ve got until it runs out to get yourself sorted and defeat the dragon.

If you let the number of days attached to your save run out first, “you’ll be treated to hellfire raining down from the sky caused by a mega-Alduin soaring overhead, followed by death,” the modder says.

“Then you’ll have to reload an earlier save and try to do it faster or start a new game entirely.” Gulp. Plus, to encourage you to try and stick to your deadline rather than shift the goalposts as that end date approaches, the mod includes a way to ‘lock’ it in place.

End Times is inspired by another title in the RPG games genre, Darkest Dungeon, according to the modder’s description. It’s modelled on the game’s “‘Stygian/Bloodmoon’ difficulty, which gives you a set number of in-game weeks to beat the game by, otherwise it’s game over”, the modder says. 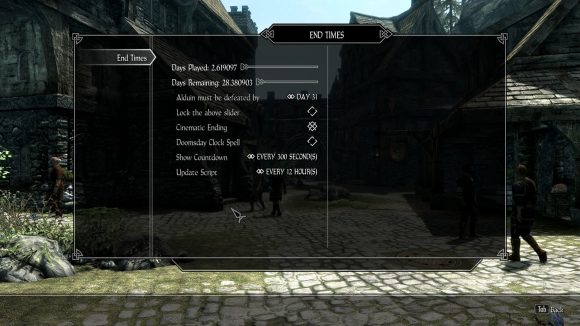 You also won’t have to worry about starting a new game if you’d rather bolt the mod on to an existing save, Grasscid says. As long as the main quest is still in progress and not complete, the mod will work – but you’ll have to be careful to get that timer set correctly, as it’ll be based on days passed since you started your Dovahkiin’s adventure rather than from the point of installation.

You can grab the base game version of the mod here, and the Skyrim: Special Edition version here, if you’re keen to pit your dawdling Dragonborn against an impending apocalypse. As ever, mod at your own risk! And check out our list of the best Skyrim mods, too, to find out what else is out there.