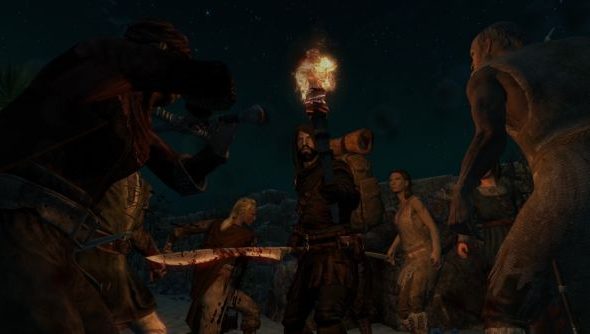 We last checked in with Enderal, a Skyrim total conversion set in its own universe with all-custom lore and content, in December. It snapped up a few Mod of the Year awards but wasn’t included in our own best Skyrim mods round-up due to not being publically available. The developers are SureAI, who you may know from the equally well regarded Oblivion total conversion Nehrim. Enderal introduces its own systems, world, monsters, weapons – the whole skybang. Some footage from the lastest alpha build has been released via German YouTuber Frank Sirius and it’s looking fantastic.

Frank promises there’s no spoilers, but he has used additional graphics mods to pretty it up a bit. Along with its new story, Enderal also takes an axe to Skyrim’s experience system and adds its own “survival mechanics and hard, challenging combat.” I’ve played around with some survival mods in Skyrim and they actually add quite a lot – encourage you to explore ruins and other places of natural warmth, make travelling and the open world more interesting. Not sure I’d want The Elder Scrolls’ slightly awkward first-person combat to be any more difficult, mind.

With a new experience system comes new classes and skills. How that all works is broken down in this dev diary, but it’s from a couple of years back now so the direction may have changed, and specifics almost certainly have.

While digging that out of SureAI’s YouTube channel, I also found this:

There’s no release date yet and you can’t get the Alpha build anywhere. There’s already a seven-chapter-long story set in the world if you want to get a feel for the lore, which can be read in PDFs downloaded from the official site. If you want to contribute to the project, they’re taking donations via a thread on the official forums, but it’s not a Kickstarter-type deal of paying for something in the future. The mod will always be free, you’re helping with its development.